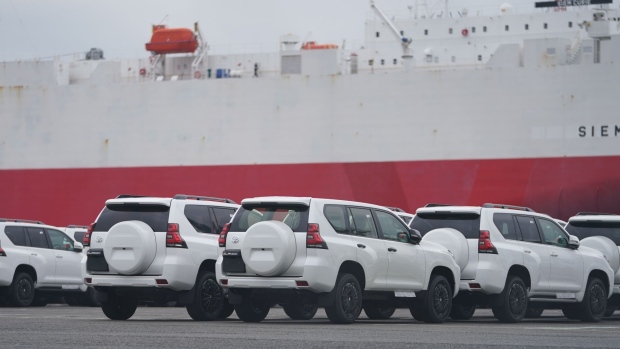 Toyota Motor Corp. Land Cruiser Prado sport utility vehicle (SUV) bound for shipment at a port in Yokohama, Japan, on Monday, May 9, 2022. Toyota is scheduled to release earnings figures on May 11. , Bloomberg

More than 180 companies around the world have mentioned terms including “China” and “lockdowns” in their first-quarter earnings calls or financial statements, according to a Bloomberg News analysis of transcripts and filings. It’s a significant jump from fewer than 50 companies in the previous quarter, and the list is still growing as more firms report financial results in the days and weeks ahead.

Toyota Motor Corp., based in Japan

Tesla Inc., based in Texas

Honda Motor Co., based in Japan

Tata Motors Ltd., based in India

Volkswagen AG, based in Germany

Ford Motor Co., based in Michigan

Dentsply Sirona Inc., a dental and medical equipment manufacturer based in North Carolina

Danaher Corp., a medical and industrial products manufacturer and services provider based in Washington, D.C.

Shiseido Co., a cosmetics brand based in Japan

Under Armour Inc., a clothing company based in Maryland

PVH Corp., an apparel company based in New York

Home, Office and Other Consumer Products

Monster Beverage Corp., an energy drinks maker based in California

SCG Packaging PCL, based in Thailand

Nidec Corp., a manufacturer of small precision motors for commercial and industrial products

Expeditors International of Washington Inc., a logistics company based in Washington