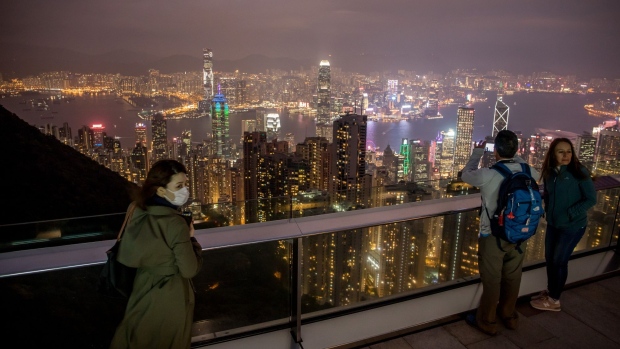 People look at the city's skyline from a viewing terrace at Victoria Peak in Hong Kong, China, on Monday, Feb. 3, 2020. The outlook for the Hong Kong economy in 2020 is “subject to high uncertainties” including the global economic recovery, U.S.-China trade relations, the ongoing protests and the progression of the viral outbreak, the government said in a release. Photographer: Paul Yeung/Bloomberg , Bruce Einhorn

(Bloomberg) -- More than 40% of members surveyed by the American Chamber of Commerce in Hong Kong said they might leave the city, highlighting concerns over China’s imposition of a harsh national security law and the local government’s handling of the Covid-19 pandemic.

AmCham found that 42% of respondents are considering or planning on moving out of Hong Kong, the group said in a report released on Wednesday.

The new security law topped the list of concerns of those looking to exit, AmCham said, with 62% citing discomfort with the law as a reason to depart. Many also worry about the law’s impact on Hong Kong’s schools, with 36% of those considering a move saying they’re concerned about the quality of education now that the law has taken effect.

In addition, 49% of respondents said quarantine policies of Chief Executive Carrie Lam’s government that make travel difficult have made them want to leave.

Hong Kong has some of the world’s most draconian Covid-19 quarantine rules, including 21-day hotel stays for most people entering from abroad and detainment in government-run centers for residents of apartment buildings with confirmed cases of variant strains of the coronavirus.

“We believe many businesses will have strong opportunities to thrive in the future,” President Tara Joseph said in a statement. “Right now though, it’s easy to worry about a brain drain of top talent and skills in a gateway city that is fueled by trade, international capital flows and global connectivity.”

Conducted between May 5 and 9, the survey received responses from 325 people, accounting for 24% of the group’s membership.

“Based on the survey results, AmCham strongly suggests that the government pay close heed to the sentiment of expatriates in Hong Kong and work towards allaying major concerns through stronger understanding of Hong Kong’s international talent, lest the city lose competitiveness versus other business hubs,” AmCham said.