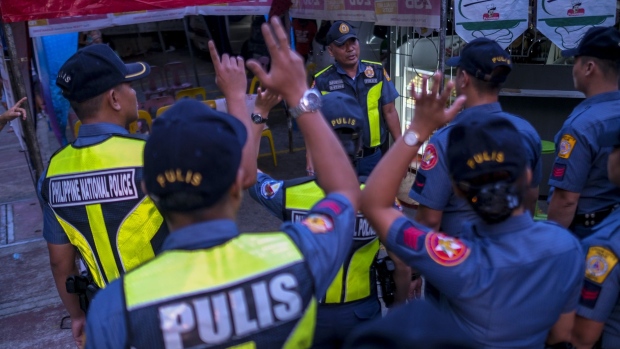 Officers with the Philippine National Police gather at the start of the country's mid-term election in Manila, Philippines, on Monday, May 13, 2019. Voters in the Southeast Asian nation go to the polls on Monday to elect new lawmakers and local government officials. , Bloomberg

(Bloomberg) -- More than 500 foreign nationals, including over 400 Chinese workers, were arrested near Manila’s airport on Wednesday for alleged telecommunications fraud, Philippine police said.

Philippine and Chinese authorities arrested the foreign workers -- including citizens of Vietnam, Malaysia, Indonesia, Taiwan and Myanmar -- who did not have work permits and were allegedly luring overseas investors to fraudulent businesses, police said.

The arrested workers, who used online identity theft techniques such as phishing in their operations, will be deported, authorities said. They’re looking at the identity of the owners of the company that employed the suspects.

To contact the reporter on this story: Andreo Calonzo in Manila at acalonzo1@bloomberg.net

To contact the editors responsible for this story: Cecilia Yap at cyap19@bloomberg.net, Ditas Lopez