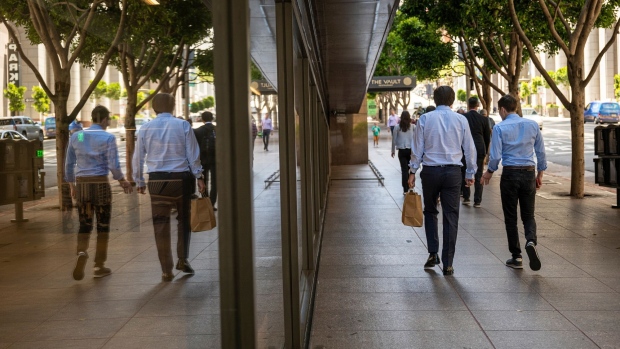 Pedestrians on California Street in the financial district of San Francisco, California, US, on Tuesday, July 12, 2022. More than a fifth of San Francisco's beleaguered office market remains vacant despite a handful of major leases in the second quarter, a sign that a sustained pandemic recovery remains elusive, according to the San Francisco Chronicle. , Bloomberg

(Bloomberg) -- As more companies announce hiring freezes and layoffs, three quarters are more likely to turn to freelancers and other contingent workers as a stopgap.

About 78% of business leaders said they are more likely to hire freelancers rather than full-time employees while economic conditions remain uncertain, according to a survey by freelance marketplace Fiverr International Ltd. With economic uncertainty growing, 85% of US companies plan to implement a hiring freeze during the current downturn, and 78% plan to lay workers off, Fiverr found.

Contingent workers are already part of many businesses’ baseline budgets. Over 80% of respondents in Fiverr’s survey of more than 1,000 owners of medium to large businesses said they’re currently using freelancers. But interest has already picked up: Fiverr has seen an increase in demand on its platform, especially from large businesses.

“A lot of companies are contemplating doing cutbacks and layoffs. But at the end of the day, all companies need to continue performing,” said Micha Kaufman, Fiverr’s chief executive officer. “They view independent talents as a variable expense that they can scale up or down as needed, without any strings attached.”

Freelancers and other contingent work arrangements allow companies to scale up or down and pivot quickly when conditions change, said Ravin Jesuthasan, a senior partner at human resources consulting firm Mercer.

“Over the last 20 years we’ve had at least four ‘black swan’ events: we had 9/11, we had the financial crisis, we’ve had the pandemic, and now we have the war in Ukraine — and who knows what’s going to come next” he said. “There’s just this growing premium we see on agility and flexibility.”

Even as companies rely more heavily on contract workers, management practices haven’t caught up. “There's a need to recognize this talent is important to the business and it still needs to be managed,” said Tracey Malcolm, a human resources consultant at Willis Towers Watson. “It's part of the workforce that a company has and a lot of organizations don't approach it that way.”

Some companies still don’t even know how many external workers they employ. An investment firm Malcolm worked with recently was “astounded” to find one division was made up of 30% contractors. Another division had 50%.