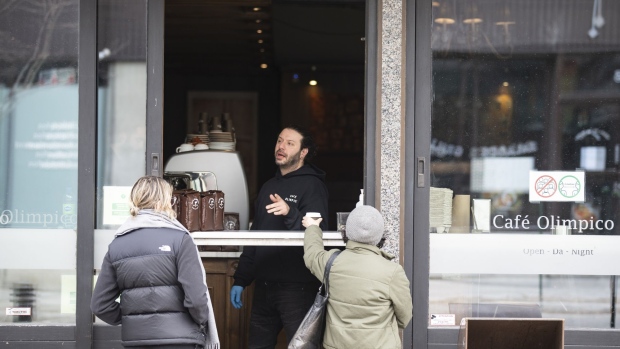 OTTAWA -- Almost one-third of businesses could stay open if physical distancing rules remain in place for six months, but nearly as many suggest they won't survive that long, according to survey results from Statistics Canada that provide a window into the financial strain of anti-pandemic rules on companies large and small.

Those restrictions have hit companies hard, with nearly one-third of respondents saying their revenues have plummeted by 40 per cent as a result of the COVID-19 pandemic.

A further one-fifth of businesses reported a revenue drop of between 20 per cent and 40 per cent, suggesting that more than half of Canadian companies have watched sales drop significantly since the crisis began in March.

The survey released Wednesday found that 32.1 per cent of respondents said they could stay fully or partially open with rules in place to keep people far enough apart to slow the spread of COVID-19.

The sharp decline in businesses' revenues has led to widespread layoffs and furloughs, with the crowd-sourced survey results from more than 12,600 companies -- some with only or two employees, others with more than 500 -- suggesting nearly one in five businesses have laid off 80 per cent or more of their workers.

The results are from an online survey this month done in tandem with the Canadian Chamber of Commerce. Statistics Canada said the study cannot be applied to the overall Canadian economy because the voluntary survey does not represent a random sample.

For instance, companies that pay employees in dividends or pay a roster of contractors aren't eligible for a key loan program because they don't have traditional payrolls.

"The next two to six weeks are going to be crucial, if we look at the data, for businesses that currently they're not able to access some of that financing, to be able to broaden it to provide that liquidity support for those businesses as well," he said.

Federal and provincial governments agreed on a broad set of steps required to reopen the economy in stages Tuesday, but the guidelines didn't set specific dates by which restrictions are expected to be lifted.

Just under two-thirds of businesses that took part in the survey said they could, at this point, reopen or return to normal operations less than one month after that happens.

"That's why we needed to make sure that the foundational elements were there, that we could all follow as Canadians, but recognize that different jurisdictions will act differently."

It has been some six weeks since public health officials asked Canadians to stay home and governments ordered the closure of non-essential workplaces to slow the spread of the novel coronavirus.

The impact on the Canadian economy has been swift.

Statistics on the Canada Emergency Response Benefit published Wednesday showed a small decline in the overall number of unique applicants for the $2,000-a-month benefit at 7.26 million, down from 7.28 million.

So far, the program, whose cost the government has estimated at $35 billion, has paid out $25.63 billion in benefits to people who have seen their earnings fall below $1,000 since the onset of the crisis in mid-March.

A separate set of data released Wednesday suggests the outlook is dim. About 63 per cent of business executives answering a different survey told the Conference Board of Canada they expect economic conditions to worsen in six months. Only one-quarter believed conditions would improve.

And while small-business sentiment is edging higher in the CFIB Business Barometer, there are still "dark clouds" hanging over the sector even if "one or two may have lifted this month," TD senior economist Brian DePratto wrote in a note. Much will rest on the different reopening plans provinces implement, he wrote.

"For consumer-facing sectors, there is the additional question of how comfortable people will be in reopening their wallets and heading back to the shops," DePratto wrote.

"Things seem to be moving in the right direction, but a long slog to 'normal' is likely."

To help Canadians suffering in the crisis, emergency federal spending to date has hit $145 billion, including a $73-billion wage subsidy program that begins payments next week.

The Trudeau government has made some changes to its plan to satisfy opposition parties, including increasing the monthly benefit for students with dependents or disabilities to $2,000 from the initially proposed $1,750.

For other students who are unable to find full-time jobs or unable to work due to the pandemic, a new Canada Emergency Student Benefit will provide $1,250 per month from May through August.

The package also includes a new grant of up to $5,000 for post-secondary students who volunteer in some aspect of the pandemic response, as well as expanded eligibility criteria for student loans and a doubling of non-repayable grants.

In addition, the government has agreed to implement unspecified new financial incentives and support measures to connect benefit recipients, particularly students, to available jobs, especially in the food and agrifood sectors. And it has agreed to ensure that the student benefit and the broader CERB are offered in a manner that will encourage employment.

Those promises were aimed at satisfying the Conservatives, who had complained that the emergency benefits are encouraging people to stay home rather than work.

As well, it has agreed to give the NDP an additional round of questions during the two weekly meetings of the Commons' special COVID-19 committee.

And to satisfy the Bloc Quebecois, the government has agreed to provide "without delay" emergency financial assistance for seniors, looking at old age security and the guaranteed income supplement as mechanisms for giving seniors extra cash.