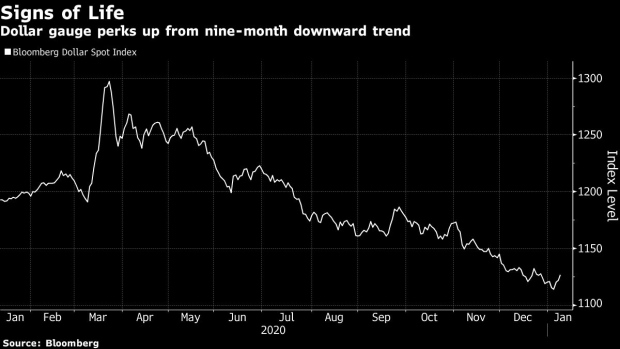 (Bloomberg) -- Morgan Stanley strategists have dropped their expectations of near-term weakening in the dollar amid a regime shift in U.S. rates propelled partly by prospects for meaningful fiscal expansion.

“It’s no longer attractive to be positioned for a weaker dollar from here given the uncertainties around the fiscal policy outlook, the monetary policy outlook and the growth in inflation outlook,” Matthew Hornbach, global head of macro strategy, said in a phone call on Monday.

The Bloomberg Dollar Spot Index headed for its best three-day rally since September on Monday as traders covered short positions while 10-year Treasury yields pushed higher to levels not seen since March. The dollar had fallen as much as 14 percent from last year’s peak in the first quarter as the raging coronavirus wreaked havoc on much of the U.S. economy, with many forecasters turning more bearish on the U.S. currency toward the end of last year.

Morgan Stanley, which Hornbach describes as an “out-of-consensus dollar bear” for much of the past nine months, has now exited short positions on the dollar versus the euro and Canadian dollar. Instead, the firm recommends shorting the British pound versus the Norwegian krone, and suggests pivoting toward being short the Swiss franc versus the loonie.

“We turn neutral on the USD amid rising U.S. fiscal stimulus odds and crowded USD sentiment,” Hornbach, colleague James Lord and others wrote in a note dated Jan. 9. Meanwhile, they said they’re looking “for signals on when to turn bullish.”

Two key factors are behind the revised call on the dollar. Democrats’ victory in the Georgia runoffs last week suggests as much as $1 trillion in additional Covid-19 relief may be coming as soon as this quarter, the strategists said. There’s also the possibility of discussions by the Federal Reserve about normalizing policy, which could begin as early as June.

“These two forces have the power to dispel a widespread USD-negative assumption of low U.S. yields,” the firm said. “With focus shifting to new fiscal policies in the U.S., we think both U.S. real yields and the U.S. dollar are in a bottoming process.”

In addition to Morgan Stanley, Wells Fargo Securities strategists wrote on Monday that “USD weakness is starting to look stretched, and we think a short-term reversal is imminent.”