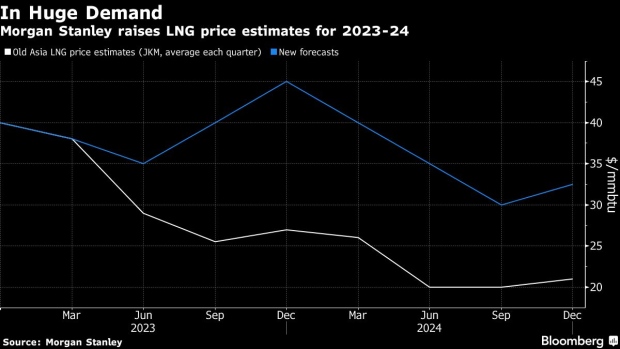 The continent looks set to cope this winter even as Russia cut gas exports to the minimum, but next year the supply crunch really could bite. Europe will need even more LNG to replace Russian volumes next summer when the continent will be refilling storage, while China’s demand will recover from lockdowns to offset lower imports from other Asian buyers. And supplies are lagging behind.

“We see a rising deficit next year,” Morgan Stanley analysts including Martijn Rats said in a note. “We see the need for prices to remain elevated for longer to continue constraining demand.”

The bank now sees Asian LNG prices averaging $39.50 per million British thermal units next year, up by almost a third from $30 before. The 2024 price forecast was raised by 57% to $34.50. Nearer-term forecasts were left unchanged.

That echoes comments from top LNG producers, which see the market getting even tighter next year, and remaining short of supply until at least the mid-2020s.

Europe has imported record volumes of LNG this year after prices spiked well above rates in Asia, helping to divert cargoes. Coupled with a milder start to the heating season and reduced demand by industries, that’s helped the region fill inventories for this winter to 90% even as Russia slashed exports to the continent.

Next year, Europe’s call for LNG could rise by almost 50 million tons, according to Morgan Stanley, and it may still have below-normal inventories for winter 2023-24 under most scenarios.

China may need an additional 10 million tons, a 14% increase in demand, which will partially offset lower purchases from some other Asian importers, including Japan and South Korea that are rushing to replace expensive gas in power generation by alternatives like coal and nuclear.

Yet, it’s unclear what price signals Europe will be sending to LNG suppliers next year as the region’s officials are discussing whether to implement caps, in addition to talks about the future of the continent’s benchmarks.