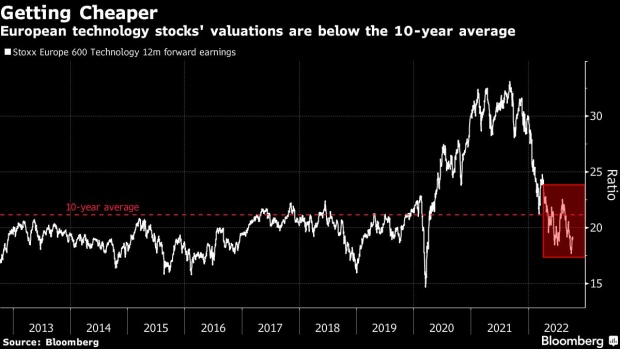 (Bloomberg) -- Morgan Stanley strategists are calling a turn to this year’s underperformance of European technology stocks.

A team led by Graham Secker double upgraded the sector to overweight from underweight on Friday, saying investors are likely to move back into growth stocks once the Federal Reserve starts to temper rate hikes.

“We may be a bit early, but software should be relatively defensive in any further selloff, and valuations look reasonable now after EU tech has posted its biggest underperformance since 2005,” the strategists wrote in a note.

Morgan Stanley’s view echoes that of Citigroup Inc., which lifted global tech stocks to overweight on Thursday. Technology is the third-worst performing sector in Europe this year with a decline of 32%, reflecting a shift by investors toward cheaper value peers. The group trades at 18.9 times forward earnings, near pandemic lows and below the average over the past decade of 21.1 times.

Citi Strategists Favor Tech and US Stocks as Recession Looms

“While technology is never going to screen as particularly cheap from a top-down perspective, we note that valuations are back to much more interesting levels,” Secker wrote.

More specifically, the strategists moved European software stocks to overweight from neutral, and semiconductor and technology hardware to neutral from underweight.