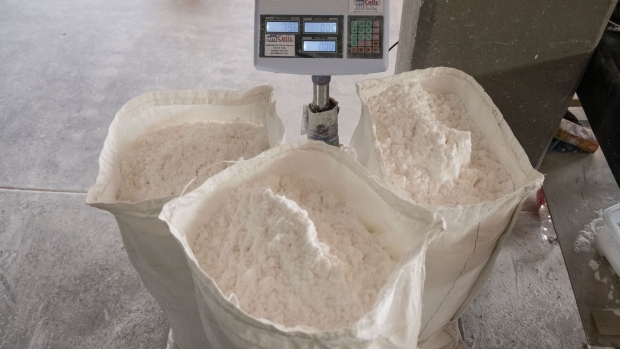 Bags of lithium carbonate are weighed inside a state-owned lithium production facility at the Salar de Uyuni (Uyuni Salt Flats) in Potosi, Bolivia, on Wednesday, Dec. 11, 2019. South America controls about 70% of the world's reserves of lithium, the metal used in rechargeable batteries for mobile phones and electric vehicles, with future refining and battery-assembling facilities seen as away to help kick start economies. , Bloomberg

(Bloomberg) -- Electric vehicle battery makers will need to raise prices by almost 25% due to soaring lithium carbonate prices, leading to crimped margins and possibly demand destruction, according to Morgan Stanley.

Chinese prices for lithium carbonate, the key ingredient in many batteries, have jumped fivefold over the past year, analysts including Jack Lu said in a note. The pass-through of costs could push EV manufacturers to raise prices by as much as 15% and may hit demand, they said in the note dated March 24.

“Historically, the battery price cost curve had been declining at a pace of 3% to 7% annually for so many years in a row it almost seemed inevitable,” the analysts said. “But molecules don’t play by the same rules as Moore’s Law. The world has changed, and along with it is a new paradigm of input costs.”

Lithium carbonate prices have surged as demand from car-makers has outstripped supply, highlighting how the energy transition may be slowed by a shortage of materials and refining capacity. China’s top lithium producers -- Ganfeng Lithium Co. and Tianqi Lithium Corp. -- reported a surge in preliminary revenue in the first two months of the year on the back of the rally.

Most battery manufacturers in China -- which dominates the lithium-ion battery industry -- buy the material on the spot market, rather than though long-term contracts, Morgan Stanley said. However, big companies like Contemporary Amperex Technology Co Ltd. may be able to get some discount, it said.

Despite the rising prices, Morgan Stanley is overweight on Tesla Inc., with a price target of $1,300 per share, about 30% higher than its current level. There’s scope for “profound” long-term changes in the battery industry, and Tesla’s scale, technology and vertical integration make it best placed to address the challenges relative to other EV manufacturers, it said.