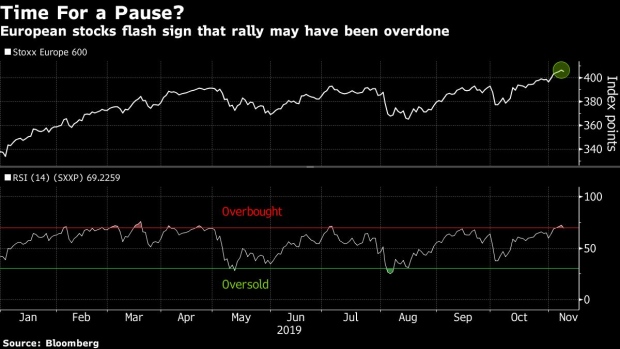 After sending European stocks surging to multi-year highs on trade optimism, investors may hit the brakes on the rally, according to Morgan Stanley.

Optimism about a U.S.-China trade deal and receding risks of no-deal Brexit have boosted shares in recent weeks, with the Stoxx Europe 600 Index now less than 2% away from a record high reached in 2015.

“With European equities now up over 10% from their August lows, there is a case to be made that equity markets may be due a pause,” Morgan Stanley strategist Graham Secker wrote in a note to clients after the close of trading Friday. “We doubt that we are on the cusp of a meaningful rebound in corporate profits either here in Europe or in the U.S.”

Technical indicators including relative strength are also “looking elevated,” according to Secker. The Stoxx 600 this week crossed above the overbought threshold, only to fall below it on Friday, signaling stocks may have rallied too much too soon.

The RSI’s recent move above 70, along with the VStoxx Index of euro-area swings and the the CBOE Volatility Index dropping below 13, “highlight that the risk-reward profile is no longer as enticing,” Secker said.

While valuations don’t look too stretched in Europe compared with global peers, the current extent of equities’ outperformance relative to bund yields has historically been difficult to sustain, according to the strategist.

The pan-European Stoxx 600 benchmark closed up 1.5% last week after news that Washington and Beijing had agreed to remove tariffs on goods and services passing between the two countries. There was some confusion on Friday, however, after President Donald Trump told reporters he hadn’t agreed to anything.

To contact the editors responsible for this story: Beth Mellor at bmellor@bloomberg.net, Namitha Jagadeesh, Marion Dakers