The banks would sail through a possible recession and are attractive buys: Chuck Lieberman

Morgan Stanley’s revenue from investment banking plummeted as capital markets seized up, underlining a slow quarter for Wall Street as a dour outlook for the economy muddles the path forward.

The firm’s investment-banking group posted US$1.07 billion in revenue, down 55 per cent from a year earlier, a bigger decline than the 47 per cent drop analysts had predicted. The bank also reported an additional US$413 million hit driven by mark-to-market losses on corporate loans held for sale as credit spreads widened.

Morgan Stanley’s trading unit helped pick up the slack as fixed-income revenue surged amid heightened volatility and clients scrambled to reposition their books.

Surging inflation and Federal Reserve efforts to help combat it have put investors on watch for a recession and the spillover effect an economic contraction can have for financial firms. Banks’ capital-markets units, which have lifted fortunes across the industry over the past two years, were hurt by a sharp slowdown in the second quarter.

“It was a very solid quarter in the face of market volatility,” Chief Financial Officer Sharon Yeshaya said in an interview. “Market activity and client activity should help support the level in equities and fixed-income businesses. But the volatility delays some of the pipeline to convert on the investment-banking side, especially on the M&A side.” 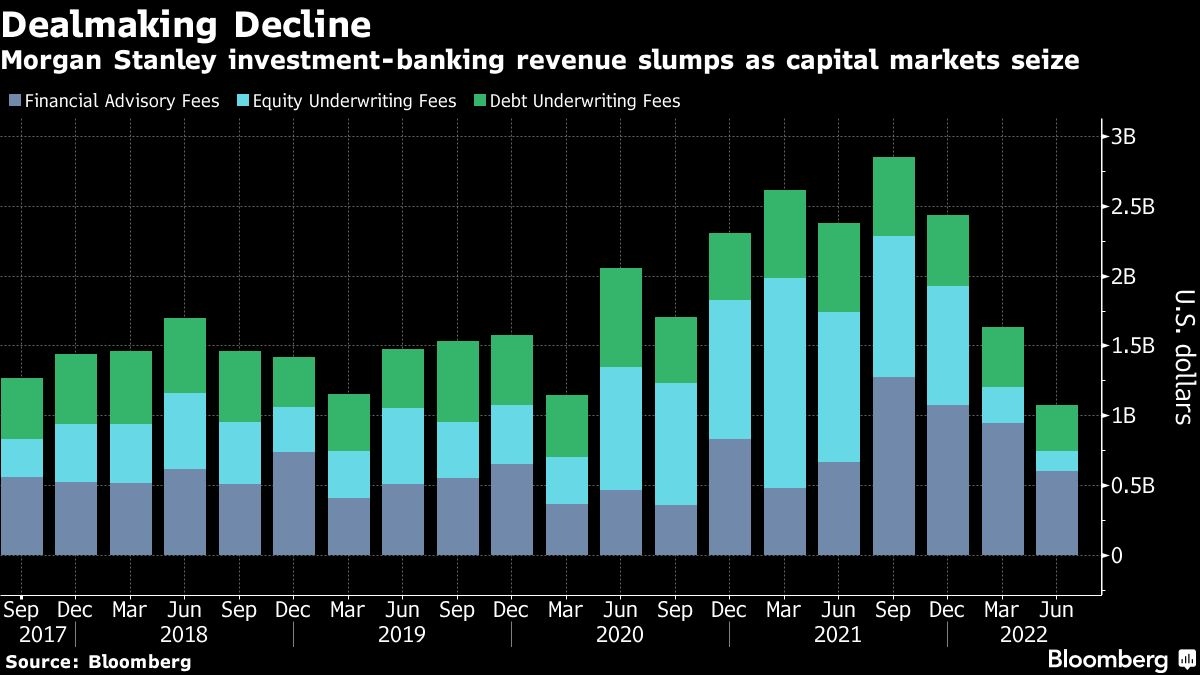 Morgan Stanley shares slumped 23 per cent in the first six months of the year, its worst performance for two consecutive quarters in more than a decade. The stock slipped 2.7 per cent to US$72.94 at 9:52 a.m. in New York.

Trading revenue of US$5.46 billion surpassed the US$5.1 billion average estimate, and was up from US$4.51 billion a year ago. That was mostly led by a 49 per cent jump in fixed-income revenue, which climbed to US$2.5 billion.

Last week, Morgan Stanley picked two veteran dealmakers as the new heads of its investment-banking group. Eli Gross, who led the transportation and infrastructure banking practice, and Simon Smith, who helmed the European banking franchise, have both been at the bank since 1998. They take over from Susie Huang and Mark Eichorn, who were named executive chairs.

On the outlook for mergers and acquisitions, “the speed in the market movement, and the speed in price discovery has caused people to stop,” Yeshaya said. “It’s unclear if sellers have yet digested those prices.”

The New York-based firm was also first to lend credibility to Elon Musk’s attempt in April to buy Twitter Inc. by helping cobble together the financing for the US$44 billion bid. Since then, it has also been dragged into the ensuing mess after the world’s richest man changed his mind about wanting to own the social-media platform.

Wealth management, where Morgan Stanley is anticipating higher net interest income this year as a result of rising rates, reported revenue of US$5.74 billion in the second quarter, down 5.9 per cent from a year earlier. Net new assets fell 26 per cent to US$52.9 billion.

The bank posted net inflows despite having “double than average tax outflows this year,” Yeshaya said.

Firmwide, Morgan Stanley expects US$500 million of extra net interest income in the next two quarters, Yeshaya said Thursday on a conference call with analysts and investors.

The company disclosed Thursday that it expects to pay a US$200 million fine “related to a specific regulatory matter concerning the use of unapproved personal devices and the firm’s record-keeping requirements.” Regulators have been probing the matter across Wall Street. Morgan Stanley’s total non-interest expenses totaled US$9.71 billion, higher than the US$9.53 billion analysts were expecting.