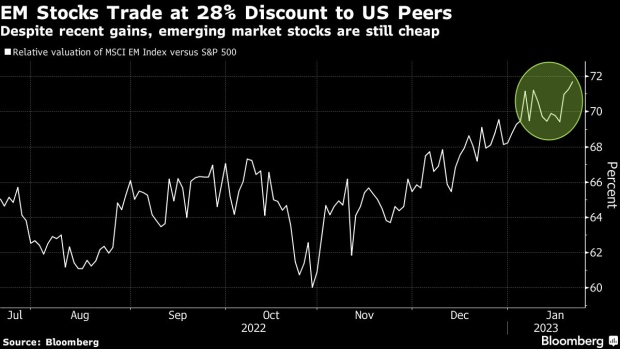 (Bloomberg) -- Stocks in emerging markets are set to be this decade’s winners, Morgan Stanley Investment Management said, adding to a chorus of investors who are souring on the US in favor of other regions.

The fund manager is taking money out of US equities to add to its developing markets exposure, according to Jitania Kandhari, deputy chief investment officer and head of macroeconomic research for emerging markets at Morgan Stanley IM. Developing equities have attractive valuations, and economies like India are set for better growth than the US, she said.

“Every decade, there is a new leader in the market. In the 2010s, it was US stocks and mega-cap tech,” Kandhari said in a phone interview. “Leaders of this decade can clearly be emerging-market and international stocks.” Morgan Stanley IM has $1.3 trillion in assets under management.

The asset class has had a strong start to the year, with the MSCI emerging-markets index soaring 8.6% compared with a 4.7% advance for the US benchmark. The gains come as China’s pullback from its strict Covid Zero policy brightens the economic outlook, while investors position for the end of aggressive central bank interest-rate hikes. Many also still see US stocks as expensive, with those in emerging-markets trading at a nearly 30% discount.

There’s a growing disconnect between US’s shrinking share of the global economy and the size of its stock market capitalization, Kandhari said. Along with fund allocations to emerging-markets that are well below historical averages and inexpensive currencies, that gives them a lot of room to outperform, she said.

Morgan Stanley IM’s comments underline a growing market theme as investors and strategists eschew US stocks while warming to those in the rest of the world. Developing-market bond and equity funds had inflows of $12.7 billion in the week through Jan. 18, the largest addition on record, while US equities had $5.8 billion in outflows, according to a note from Bank of America Corp. citing EPFR Global data.

Kandhari advises against following benchmark weights on the indexes, particularly when it comes to China, and being selective among emerging markets.

“China is a big part of the index, 30%, and we don’t think it will be a bigger part of the index growth,” she said, citing challenges for the country including overly indebted sectors of the economy and shifting global supply chains. “You really have to enter in an active way to invest in other countries that look promising and stay away from benchmark weights.”

India, on the other hand, is a favorite and one of the largest overweights in her fund.

“Everything that is not working for China is working for India,” Kandhari said. It has a growing population and lower debt than China, while China is “at the eye of a de-globalization storm” that’s driving supply-chain diversion and benefiting other emerging markets, including Indonesia, Thailand, Vietnam and Mexico.

“Shifting supply chains away from China is creating a lot of manufacturing revival capacity and FDI in other emerging markets, which acts as a growth multiplier in these economies,” Kandhari said.

And while things may not be smooth in all developing nations, that won’t affect the overall equity story in the same way that emerging-market debt crises did in the past, she said.

“A blowup in Ghana, Sri Lanka or Pakistan will not have a disproportionate impact on emerging markets,” she said. “I see less risk compared to the past. Smaller countries are more risky but they are under 3% of global GDP; they are not systemic countries.”

--With assistance from Srinivasan Sivabalan.