Fixed-income trading revenue almost tripled, driving a 73 per cent jump in total trading that surged past expectations, according to a statement Thursday. That spurred firmwide revenue and earnings to all-time highs amid wild market swings caused by the coronavirus pandemic.

The strategy was to be ready so that “when markets are very active and volatile, we would still perform very well across our whole investment-banking franchise,” Gorman said in a Bloomberg Television interview. “This was that crisis, and that’s what we delivered.”

The gains brought the overall trading haul for the five biggest U.S. investment banks to US$33 billion, a windfall that helped all of them survive the brunt of the coronavirus pandemic with profits intact. 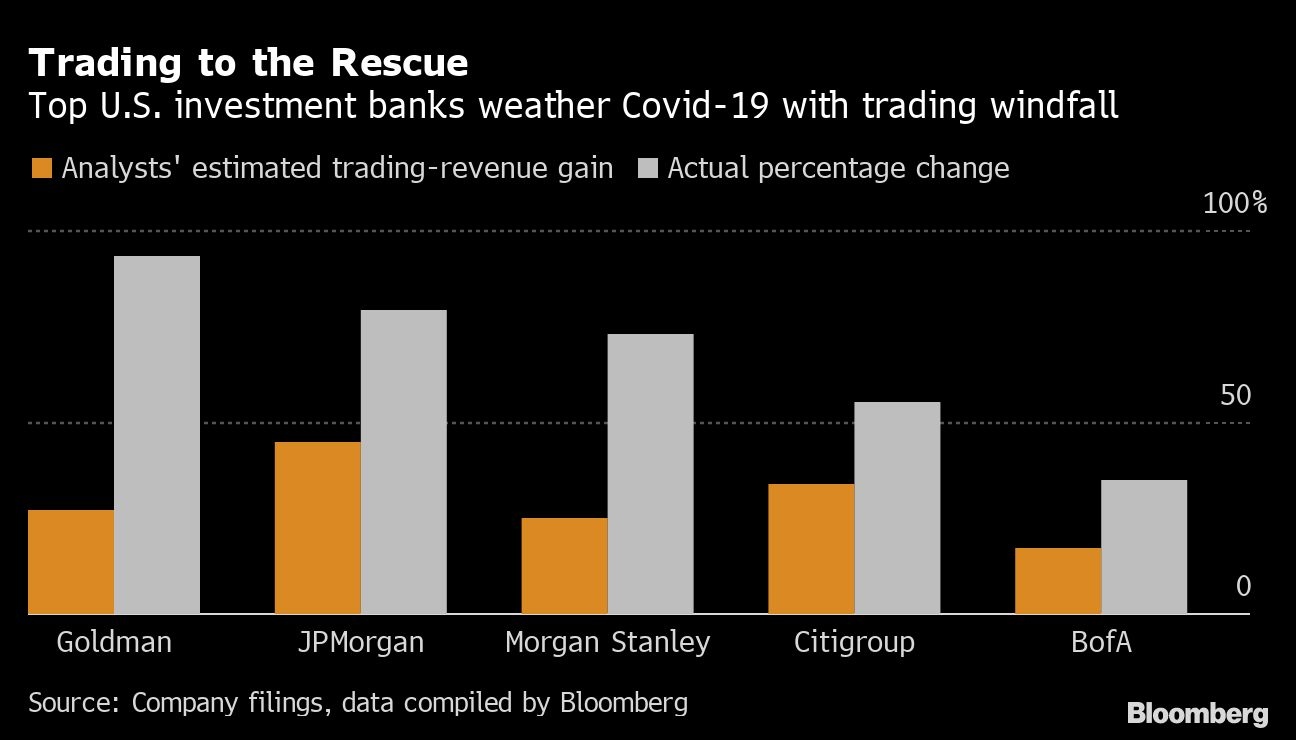 As the COVID-19 outbreak intensified earlier this year, the Fed cleared the way for companies to access desperately needed cash with programs that effectively served as credit backstops, allowing markets to thaw. That, in turn, spurred demand for Wall Street’s trading and underwriting services.

“It’s clear that a lot of people did well in light of client activity,” Chief Financial Officer Jonathan Pruzan said in an interview. While much of that has continued in the first few weeks of the third quarter, “we would expect a reversion to a more normalized level,” he said.

Morgan Stanley’s trading gains come at a critical juncture for the bank, which is leaning on the business to shore up earnings as it makes a bigger pivot toward managing money for others. The bank’s pact to purchase E*Trade Financial Corp. in February is set to be the biggest acquisition by a top U.S. bank since the financial crisis, and a sign of Gorman doubling down on the success of his firm’s Smith Barney purchase a decade ago.

Fixed-income trading revenue at Morgan Stanley came in at US$3.03 billion, compared with the US$1.81 billion analysts were predicting, based on estimates compiled by Bloomberg. Equities trading revenue rose to US$2.62 billion, higher than the US$2.27 billion average estimate.

Morgan Stanley’s stock is up 2.4 per cent since the start of the year, the best performance among the top five banks and a show of resilience that kept the firm’s market capitalization above that of Goldman Sachs Group Inc. -- a perennial rival -- for much of the year. Shares of the company climbed 1.8 per cent to US$52.28 at 10:09 a.m. in New York.

Investment bankers at the firm posted revenue of US$2.05 billion on the strength of a 64 per cent jump in underwriting revenue, as the firm took its share of the surge in new stock and debt issuance by corporate America.

Wealth-management revenue, which typically accounts for about half of Morgan Stanley’s total, rose six per cent to US$4.68 billion.

--With assistance from Sonali Basak.