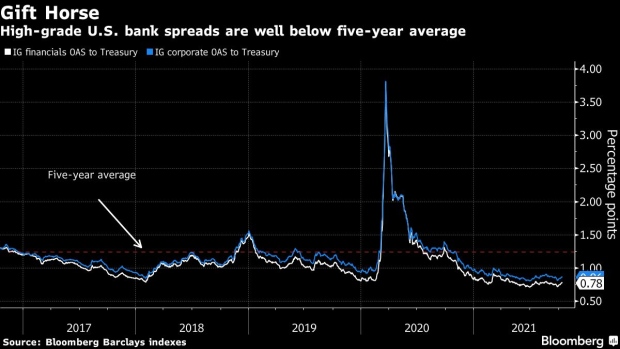 (Bloomberg) -- Morgan Stanley is the first big Wall Street bank to bring a new bond deal after reporting third-quarter earnings, setting the stage for other banks to follow.

The lender is borrowing $5 billion in a two-part bond sale on Thursday, according to a person with knowledge of the matter. The longest maturity, an 11-year portion, yields 1 percentage point above Treasuries, after initial discussions of around 1.15 percentage points, said the person, who asked not to be identified as the details are private.

A barrage of U.S. bank-earnings beats heralds a splurge of bond issuance from the financial sector before borrowing costs rise too much. Benchmark 10-year Treasury yields reached the highest since mid-year this week. The bond deal comes as risk premiums in corporate debt remain low, increasing the appeal to issuers.

Morgan Stanley’s investment bankers scored their best quarter ever, boosted by dealmaking. The division hauled in $2.85 billion in the third quarter, a 67% jump that topped analysts’ estimates and helped drive firm-wide profitability higher.