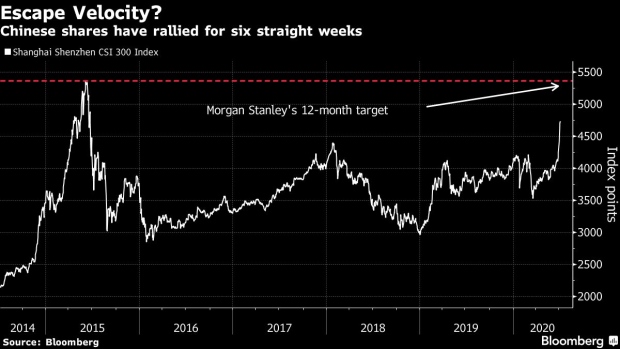 A man flies a kite on the Bund as skyscrapers of the Pudong Lujiazui Financial District stand across the Huangpu River during sunrise in Shanghai, China, on Friday, March 20, 2020. Most of China is now considered low risk and should return to normal work and life, Premier Li Keqiang said at a government meeting on the coronavirus, which is spreading rapidly in Europe, the U.S. and elsewhere. Photographer: Qilai Shen/Bloomberg , Bloomberg

(Bloomberg) -- One of China’s main stock gauges will test its highest level of the past decade over the next year as a recent rally extends, according to Morgan Stanley.