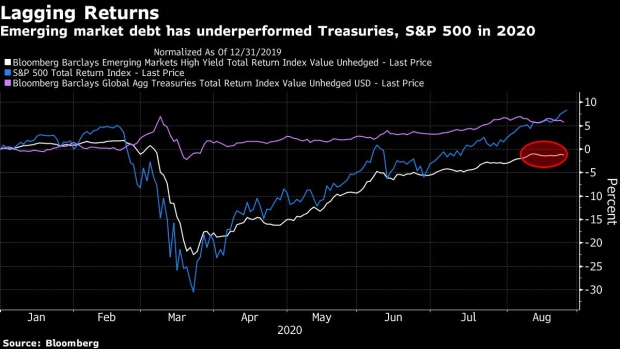 Traffic passes the Marriner S. Eccles Federal Reserve building in Washington, D.C., U.S., on Tuesday, Aug. 18, 2020. In addition to helping rescue the U.S. economy amid the coronavirus pandemic, Fed Chair Jerome Powell and colleagues also spent 2020 finishing up the central bank’s first-ever review of how it pursues the goals of maximum employment and price stability set for it by Congress. Photographer: Erin Scott/Bloomberg , Bloomberg

(Bloomberg) -- The Fed is about to bestow more gifts on the market, stoking a new phase in the risk rally, according to Morgan Stanley Investment Management portfolio manager Jim Caron.

With the Federal Reserve poised to adopt a policy that could suppress rates for years to come, Caron is adding higher-yielding debt including from emerging markets to Morgan Stanley’s global fixed-income funds.

Under the new Fed approach, policy makers may tolerate a run-up in consumer prices above their 2% target before tightening policy. For markets, the big takeaway is the prospect of zero rates for five years or even longer.

On the flip side, the prospect of hotter inflation is stoking demand for hedges such as gold and CPI-indexed bonds. Longer-dated debt in particular is sensitive to changes in consumer-price expectations.

Caron thinks that concern is overblown. “They’re doing quantitative easing at the same time as likely adjusting rate policy, so they won’t be allowing bond yields to rise much,” he said. “The Fed is still keeping the 30-year yield at a very low level with QE.”

Fed Chairman Jerome Powell is slated to provide an update on the Fed’s framework when he speaks on Thursday to the central bank’s Jackson Hole conference, being held virtually this year because of the coronavirus pandemic. The changes could be unveiled as soon as next month.

“They only other outcome from all of this is you’ll see the dollar weakening,” Caron said.