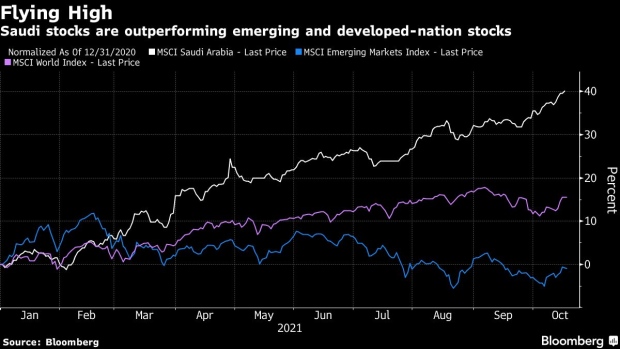 Visitors stand and watch stock movements displayed on large video screens inside the Saudi Stock Exchange, also known as the Tadawul All Share Index in Riyadh, Saudi Arabia, on Monday, Nov.28, 2016. The Tadawul All Share Index advanced 26 percent since Saudi Arabiaâs record-breaking bond sale last month, the most in the world during that period. Photographer: Simon Dawson/Bloomberg , Photographer: Simon Dawson/Bloomberg

The sustained rally in Saudi stocks over the last 18 months has led Morgan Stanley analysts to concede they got it wrong.

“MSCI Saudi Arabia has been the best performing major country -- in the world -- this year and was also one of the best performing last year,” Morgan Stanley analysts wrote in a note on Monday, double upgrading their recommendation on the country to overweight. “Having been underweight since May 2020, we’ve clearly gotten this one wrong.”

The benchmark Tadawul All Share Index has surged to its highest since 2006 on the back of soaring oil prices and amid increased retail trading activity. Still, the index remains 42% below its record high of 2006, when efforts by the government to use capital markets to help redistribute oil wealth went some way to fueling a speculative bubble driven mostly by retail traders.

Morgan Stanley now thinks high Saudi valuations are here to stay as the market is more driven by earnings, which are forecast to grow. The analysts also note that while foreign positioning in the country remains low, it has started to pick up.

Saudi Arabia has “one of the strongest transmission mechanisms of higher oil prices into economic activity of any EEMEA country,” and its growth outlook seems structural and likely to last for several years, the analysts wrote in a broader note about the region, saying it’s poised to be a beneficiary of higher commodity prices.

The analysts think banks are the best play in the country. Financials and materials stocks have been the best performers on the MSCI Saudi Arabia index this year.