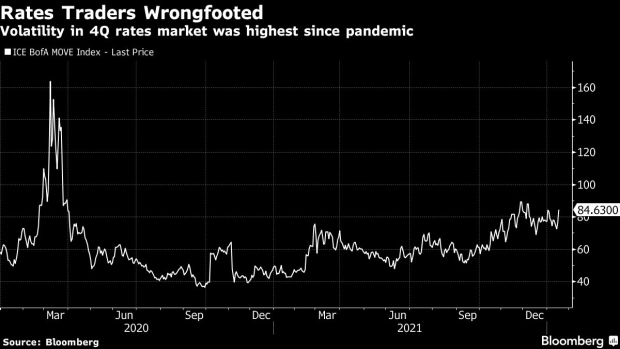 (Bloomberg) -- Morgan Stanley saw a plunge of more than 60% in its U.S. rates trading business last year, fueled by a fourth-quarter flop in one of its most complex desks, as uncertainty about how the Federal Reserve would combat inflation wreaked havoc across Wall Street.

The firm’s U.S. structured rates book suffered about $50 million of losses in the last three months of the year, leaving that area in the red for 2021, according to people with direct knowledge of the performance. The rates performance was a blemish on a set of results otherwise cheered by investors for delivering record profit and revenue last year.

The rates loss is a window into the wider upheaval in bond markets that struck in late 2021 and sparked Wall Street’s worst debt-trading quarter in three years -- with Morgan Stanley’s drop the most dramatic among its rivals. Still, the bank’s net income rose 9% to $3.7 billion, exceeding analysts’ forecasts, while the firm raised its profitability targets.

Mark Lake, a spokesman for Morgan Stanley in New York, declined to comment.

The breakdown of the bank’s fixed-income performance, which the firm doesn’t disclose, sheds some light on an area that several big firms blamed for last quarter’s falls being sharper than expected as trading levels normalized from last year’s pandemic-boosted volumes.

The losses on structured rates contributed to a 31% decline in fixed-income trading revenue to $1.2 billion at Morgan Stanley, compared with the $1.4 billion predicted on average by analysts surveyed by Bloomberg.

In a presentation, the firm blamed a “challenging trading environment in rates” along with a decline in credit-trading volumes. JPMorgan Chase & Co., which typically houses the biggest fixed-income division on Wall Street, also flagged a “challenging trading environment in rates.” Citigroup Inc. and Goldman Sachs Group Inc., Morgan Stanley’s arch-rival, also cited declines in revenue at the business.

The performance of the structured rates desk worsened an indifferent year for Morgan Stanley’s broader rates-trading business, which generated far less revenue than what bosses at the New York-based firm had hoped for, the people said. It raises questions about how the biggest banks -- and their hedge fund clients -- will navigate the Fed’s hotly debated path to higher rates after a banner 2020.

Rates traders across Wall Street, who deal in government bonds and other securities linked to interest rates, struggled in 2021 as markets normalized compared with the pandemic. Some were then wrong-footed toward the end of the year as investors speculated that central banks would cut stimulus programs and hike interest rates to tackle record inflation.

Market upheaval in October triggered losses across the industry, including for hedge funds such as Brevan Howard Asset Management and Alphadyne Asset Management. Volatility in the market for U.S. Treasuries reached the highest since the pandemic as the Federal Reserve signaled plans to cull its bond-buying program and investors speculated about possible rate hikes.

“Many traders were not positioned for higher rates and took some losses,” said Scott Skyrm, executive vice-president at Curvature Securities LLC.