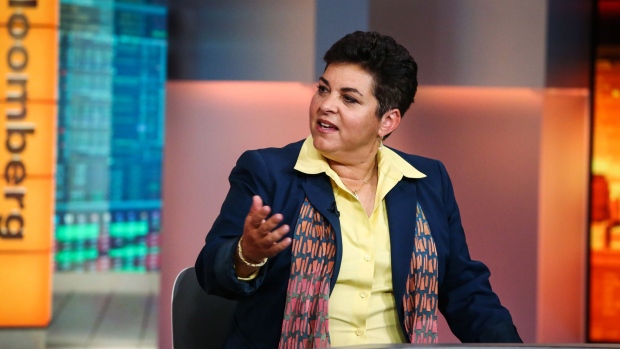 (Bloomberg) -- The chief investment officer of Morgan Stanley Wealth Management has a warning for investors who are chasing the latest rally in stocks: Don’t get too excited about a potential peak in inflation after the consumer-price index cooled off a bit in July.

Lisa Shalett joined this week’s episode of the “What Goes Up” podcast to explain the firm’s cautious stance toward the market, and how CPI is still elevated enough that the Federal Reserve needs to continue lifting rates aggressively.

Below are condensed and lightly edited highlights of the conversation. Click here to listen to the full podcast, or subscribe on Apple Podcasts or wherever you listen.

Q: Does the Wednesday CPI report and the market reaction to it change your thinking at all? Does it create any silver linings in the clouds that you see for the economy and the markets?

A: No, not at all. In fact, the idea that inflation may have peaked, in our humble opinion, may be correct directionally, but may also be a little bit of a head fake with regard to this idea that, hey, game over, problem solved, the Fed has conquered the day, and Fed credibility is back and all of that. Our guess is a lot of things have gone right here vis-a-vis energy prices, vis-a-vis global demand in Europe, and China in particular really being much slower than global economists were calling for in the month of July, which has helped ease a lot of supply-chain issues, has helped ease and take some of the heat off some of the food parts of inflation. So our guess is that yeah, directionally this is right. But for the markets to be celebrating as they have been since the middle of June, our guess is we’re way premature for that.

Q: To what extent does the CPI print relieve pressure on the Fed?

A: The good news for the Fed is, like I said, direction is correct. We are not making new highs in year-over-year inflation comparisons. It looks like 9.1%, at least for now, is going to be cycle peak on headline CPI inflation. That is directionally good, and if I’m Jerome Powell I probably do have a smile on my face and I’m glad that energy prices went my way. But let’s get real here, people. I mean, 8.5% on your headline and a core that was really unchanged at close to 6% is nowhere near a sustainable level. It’s three times your target of 2%. And look, we know throughout history, if Jerome Powell is really the student of history that he claims to be, if he really thinks he’s Paul Volcker, then he knows that it’s going to be very hard for him to take his foot off the accelerator on the fed funds rate until the fed funds rate is approaching core CPI. And if you look throughout history, most Feds that are trying to fight inflation have to get to that point.

So inflation coming down toward something closer, having core inflation come down to something below 4% means he still has about another 150, 175 basis points to go on fed funds, and he’s probably going to have to get there sooner rather than later. September was looking like 50 -- we had a brief moment on the labor data, which was super hot, where some exuberant folks said, ah, it’s gotta be 75. And now we’re back to 50. So we’ve round-tripped. I don’t think there’s a lot of new news in this, other than the direction is correct, but the levels are wrong.

Q: So do you think the market pricing is right to think 50 in September? Is there any scenario where we could go back to the old world of 25 basis points by September?

A: It would be hard to get to 25, I think. That’s just, again, the distance and speed here between that core, where core inflation is and where the current fed funds rate is, I think they need to keep their foot on the accelerator. Obviously if labor markets completely crap out, maybe they would downshift to 25. But I think it would really take two bad labor reports, meaning the one for August and the one for September, which they won’t have at the next meeting, I should be clear, for them to really downshift that much.

A: From January to June, our analysis has been that this has been a very, very textbook bear market. And what I mean by that is that we saw a very clear, very well-telegraphed pivot in Federal Reserve policy that was unequivocally driven by a Fed that was massively behind the inflation curve. As a result, the market had to discount a hike in the fed funds rate. So real interest rates moved up and price-earnings ratios moved down, and it was in a very clear, linear mathematical formula. And so the first 20-24% drawdown on the S&P 500 from January to the middle of June was very textbook. Really from there, I think we’re getting a very typical reflexive bear-market rally, meaning you get a pause, it looks like the Fed says we’re going to now be data-dependent. Folks think the data’s going to get more constructive, and we get folks thinking that they’re going to find some bargains, and they go in and they find the bargains where things have sold off the most. And some of the biggest damage, as we know, was in the unprofitable tech space, some of the meme-stock space, and some of the more core pieces of the Nasdaq and Faang. And so that’s driven this hope that the worst is over.

But folks who are true students of the market know that in every bear market we have these retracement rallies. They are head-fake rallies. And the reason is that we have to understand that it’s not enough for price-earnings ratios to come in. Policy operates with a lag, and it has an impact. It slows the economy. And if the economy slows, corporate profits go down, it’s just a fact. It’s math. And so we have not seen those earnings estimates come down yet, and that’s really what we’re waiting for.

And what we have found perhaps most curious is what we have said is that the drawdown on corporate profits is going to be relatively modest. It’s only going to be 10 to 15% -- and we have people calling us bearish. I remind people in the last three recessions -- ‘91, ‘01 and the great financial crisis -- you were looking at drawdowns in profitability anywhere from 35 to 60%. So if S&P 500 profits are down 10 to 15% over the next 12 months, that that’s not too bad.