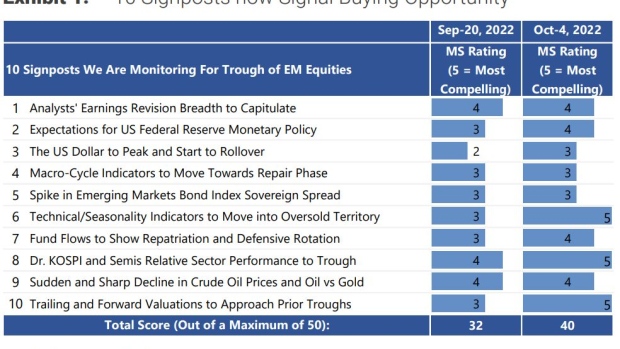 (Bloomberg) -- Having endured a long stretch of losses, stocks in emerging markets and Asia excluding Japan are close to completing their bear-market cycles, according to Morgan Stanley.

It’s highly likely these markets are bottoming amid “abundant” signs of extreme selling, the investment bank’s strategists including Jonathan Garner wrote in note Tuesday. They upgraded emerging-market and Asia ex-Japan stocks to overweight from equal-weight.

The reassessment from Garner and team, which correctly predicted deepening routs in emerging and China markets earlier this year, follows the longest ever peak-to-trough run for the MSCI Emerging Markets Index as a surging dollar and China’s stringent Covid restrictions took a toll.

Morgan Stanley expects the MSCI EM benchmark, which has slumped for five straight quarters and lost 26% this year, to rally about 12% from Tuesday’s close till June.

“A lot of wood has been chopped” and “it’s time to plant saplings for next cycle,” Garner and his colleagues wrote. Investors should “rotate towards proven early-cycle beneficiaries,” they added, also upgrading Korea, Taiwan equities as well as Asia’s semiconductor and tech hardware sectors to overweight.

The MSCI EM index is poised for its fourth annual underperformance versus a gauge of developed market equities. China takes a bulk of the blame for the historic downturn in EM shares, with the nation’s Covid-Zero policy, property crisis and tensions with the West rendering its markets one of the world’s worst performers.

Those issues will keep China from outperforming over the next 12 months even as it is likely to participate in an EM rebound due to its oversold state and low valuations, Morgan Stanley said.

To be sure, Chinese stocks listed in Hong Kong were Asia’s best performers on Wednesday as trading in the financial hub resumed after a holiday. The benchmark Hang Seng Index jumped more than 6%, playing catch up to a global rally that came after weak US economic data spurred bets that the Federal Reserve won’t be too aggressive in raising rates.

Meanwhile, Garner’s US colleague Michael J. Wilson -- one of Wall Street’s biggest equity bears -- still sees further downside in US equities. He has however predicted an eventual low for the S&P 500 coming later this year, or early next, at the 3,000 to 3,400 point level.

A framework of 10 signposts that Morgan Stanley uses to identify market inflection points now indicates a high probability for a trough to form for EM and Asian stocks, signaling a “compelling” buying opportunity, according to the note.

South Korea and Taiwan are the “highest conviction opportunities into a new cycle” as both markets have substantially underperformed this year and a turning point in the semiconductor inventory cycle is near, Garner’s team wrote.

Morgan Stanley lowered its views on some of this year’s outperformers, downgrading India and Malaysia to underweight and moving Indonesia, Singapore and Chile to equal-weight. The bank also raised Mexico to neutral.