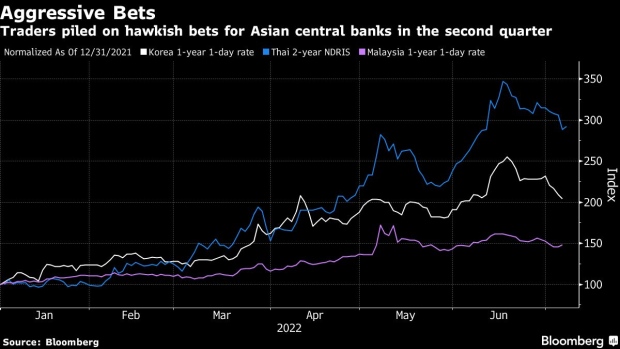 (Bloomberg) -- Bets that Asian central banks will keep ramping up interest rates are overdone as inflation is likely to peak this quarter, according to Morgan Stanley.

Consumer prices may rise less rapidly than currently expected given supply imbalances are reversing, global food costs have fallen and wage pressures will be muted, economists led by Chetan Ahya wrote in a note Wednesday. Price gains may be stickier in Australia, South Korea and Singapore while remaining within the comfort zone in China, they said.

Morgan Stanley’s prognosis may offer some comfort to Asia’s stock and bond traders who have been rocked by fears that regional central banks will follow the Federal Reserve in pushing up rates aggressively. The forecast also coincides with speculation the weakening global outlook will cause policy makers to opt for more measured increases.

“The level of interest rates needed to slow growth and demand will not be as high as what is being perceived by markets,” the Morgan Stanley analysts wrote. “We are increasingly confident that inflation is peaking this quarter, and that inflation could start to surprise on the downside in the coming months.”

Emerging Asia bonds have fallen for four straight months, while the MSCI Asia Pacific Index of shares is trading near a two-year low after the Fed delivered a series of outsized rate hikes to tame inflation. Policy makers in South Korea, the Philippines, India and Malaysia have also tightened in recent months.

South Korea’s one-year one-day swap rate predicts policy makers will raise their benchmark to 4.20% by mid-June, versus economists’ forecasts for it to peak at 2.50% by year-end. Thailand’s two-year non-deliverable interest-rate swap shows traders are pricing in more than 200 basis points of rate hikes over that period.

While traders are betting on further rate hikes, global inflation is already showing some signs of cooling. Costs of everything from cooking oils to wheat and corn -- a key component of Asian inflation gauges -- have tumbled to their lowest level in months, while the Bloomberg Commodity Index has plummeted from a high set a month ago.

“With growth concerns now coming to the fore and perhaps taking some precedence over inflation risks, we think it has reduced the risks that central banks in the region will have to go deeply into restrictive territory as implied by market pricing,” the economists wrote.