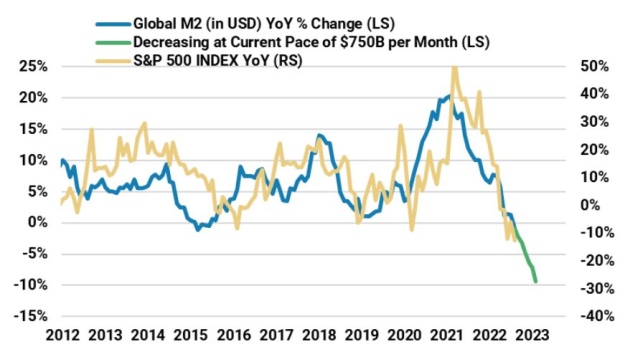 (Bloomberg) -- Michael J. Wilson, one of Wall Street’s biggest equity bears, says that while the Federal Reserve’s dovish pivot is becoming more likely amid falling money supply, this doesn’t remove the risk of a sharp contraction in earnings.

The tightening of liquidity in the global financial system is entering a “danger zone” where economic accidents tend to happen, increasing the chances of the Fed restarting quantitative easing, Morgan Stanley strategist wrote in a note on Sunday. This could lead to a recovery in stocks, he said, but this doesn’t change Morgan Stanley’s concern about the outlook for earnings.

“A Fed pivot, or the anticipation of one, can still lead to sharp rallies,” Wilson said. “Just keep in mind that the light at the end of the tunnel you might see if that happens is actually the freight train of the oncoming earnings recession that the Fed cannot stop.”

Wilson, who predicted this year’s equities selloff, wrote that the year-on-year rate of change in money supply in dollars for the US, China, the Eurozone and Japan has turned negative for the first time since March 2015, a period that immediately preceded a global manufacturing recession. Such tightness is unsustainable “and the problem can be fixed by the Fed, if it so chooses,” he wrote.

The strategist said last week that US equities are in the “final stages” of a bear market and could stage a rally in the near term going into the earnings season before selling off again.

READ: Goldman Sees More Selling in US Stocks by Households in 2023

Credit Suisse AG strategists led by Jonathan Golub on Monday cut their year-end target for the S&P 500 by 10% to 3,850 points, implying 7.4% upside from Friday’s close. Separately, the strategists initiated their end-2023 target at 4,050, seeing just 5.4% gains for that year.

Rapidly declining nominal gross domestic product growth should result in less-robust revenues for companies, while declining inflation combined with sticky wages should lead to margin contraction in 2023, according to the strategists. Separately, recessionary concerns should weigh on buybacks, they said.