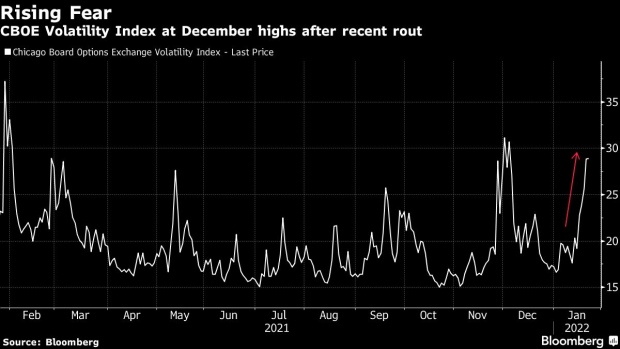 Monitors display Dow Jones Industrial Average market data outside the Morgan Stanley headquarters in New York, U.S., on Friday, Jan. 21, 2022. With the worst start of a year in more than a decade and a $2.2 trillion wipeout in market value, the Nasdaq Composite Index couldnt have had a messier kickoff to 2022. , Bloomberg

(Bloomberg) -- One after the other, stock market bears say their calls have finally been vindicated. Morgan Stanley’s Michael Wilson is the latest to claim his warnings were spot on.

The strategist, who has long been a skeptic of the rally that pushed U.S. equities to successive records, said Monday that January’s rout “fits nicely” with his so-called fire and ice narrative, according to which markets were set for a drawdown amid tighter monetary policy and decelerating growth.

If anything, the retreat has further to go, Wilson and his colleagues wrote in a note, borrowing again from Game of Thrones to warn that “winter is here,” with concerns about a slowing economy poised to take over from jitters over Federal Reserve policy as the main force pulling stocks lower.

“We have been monitoring PMIs and earnings revisions breadth for signs the slowdown is bottoming, but it has quite a bit further to go, in our view, and equity markets are not yet priced for it,” the Morgan Stanley strategists said. “It’s too early to get bullish.”

U.S. futures contracts edged lower again on Monday, after the worst week for the Nasdaq 100 index since the pandemic selloff in March 2020. Investors now have to contend with Wednesday’s Fed meeting, where officials are expected to signal that they’ll raise interest rates in March and shrink their balance sheet soon after.

Meanwhile, the earnings season so far has failed to assuage growing pessimism about the macroeconomic outlook. Goldman Sachs Group Inc. strategists said Monday that guidance for the months ahead has been “disappointing,” as only one S&P 500 company -- Micron Technology Inc. -- has both beaten earnings estimates and raised its outlook.

Markets are increasingly concerned that a more hawkish shift from the Fed could hit earnings growth, Goldman strategists led by David Kostin wrote in a note. “Investors will require a catalyst in the near-term to add length, but few obvious catalysts are evident in the near-term,” they said.

When it comes to places to hide amid a deteriorating backdrop, Morgan Stanley’s Wilson reiterated his recommendation for value stocks with a defensive bias. Goldman’s team favors stocks with high pricing power, while JPMorgan Chase & Co.’s Mislav Matejka said European and U.K. stocks that are less vulnerable to rising rates are “looking interesting” versus the U.S.