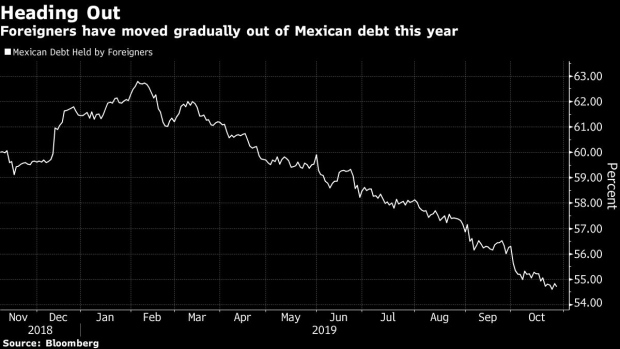 (Bloomberg) -- Analysts from Morgan Stanley to UBS Group AG to Societe Generale SA are taking an increasingly cautious stance on Mexico, warning that measures needed to bolster growth may come at the expense of government finances.

They see a moribund economy and little hopes for a pickup without fiscal stimulus, a situation that runs up against President Andres Manuel Lopez Obrador‘s pledges to maintain a primary budget surplus. Already nervous about the president’s populist tendencies, they cite the spending versus growth dilemma as one of the biggest tests for his government as it looks toward its second year in power.

“The main risk for Mexico is by the end of next year as we head toward the midterm elections and see how the AMLO administration is going to deal with potential slow growth,” said Bertrand Delgado, a strategist at Societe Generale.

In Morgan Stanley’s view, the risks are too close for comfort. The bank on Wednesday closed its bullish call on the peso, rates and bonds from the state-owned oil company. UBS is cautious on Mexican fixed-income assets, citing the risk of worsening public finances and rating cuts. Foreign bondholders have already been pulling money out of the country, with overseas holdings of Mexico’s domestic debt down to 55% of the total outstanding from a peak of 66% in 2017.

Mexican assets staged a broad sell-off in the months leading up to Lopez Obrador’s widely anticipated election win in July 2018, based on concerns he would boost state meddling in the economy. But there’s been a partial recovery since his inauguration in December. The peso is up 2.8% this year, among the best in emerging markets, and average overseas bond yields have dropped a full percentage point. The benchmark stock index has gained 5.4%, though that’s less than half the jump for MSCI’s Emerging Market Stocks Index.

“It looks so-far-so-good in terms of conversations between the AMLO administration and the business and investor community,” said Delgado, who says gains could continue for a while before the ultimate reckoning comes for Mexico.

For Alejo Czerwonko, a strategist at UBS in New York, that reckoning could come from a downgrade of Mexico’s credit rating sometime over the next year, which makes him bearish on the long-term investment outlook for Mexico.

“In spite of the commitment to fiscal responsibility, the risk of deteriorating public finances persists,” he said. “Sovereign rating downgrades remain a question of when, not if.”

Moody’s Investors Service Inc. and S&P Global Ratings have negative outlooks on the sovereign credit, while Fitch is neutral. Petroleos Mexicanos, the state oil company known as Pemex, is among the biggest drags on government finances, and that burden will continue as the company struggles to boost output while coping with more than $100 billion of debt.

While Lopez Obrador has promised funds and a lower tax burden to rescue Pemex, the company was slashed to junk by Fitch in June, and a similar decision by either Moody’s or S&P would almost certainly push its bonds off the main investment-grade indexes and lead to a forced sell-off.

But the fiscal pressure is amping up amid weak growth. Gross domestic product edged up just 0.1% in the third quarter after the economy barely avoided a technical recession in the second. Mexico’s central bank, known as Banxico, is expected to lower interest rates in coming months to boost growth, which could reduce the appeal of the peso for investors who borrow in dollars to purchase higher-yielding currencies.

“Banxico has embarked on what is likely to be a protracted easing cycle, which would erode the peso’s carry advantage over time,” said Ilya Gofshteyn, a New York-based strategist at Standard Chartered. “We expect this to be a drag on the peso’s performance in the second half of 2020.”

To contact the editors responsible for this story: Carolina Wilson at cwilson166@bloomberg.net, Brendan Walsh