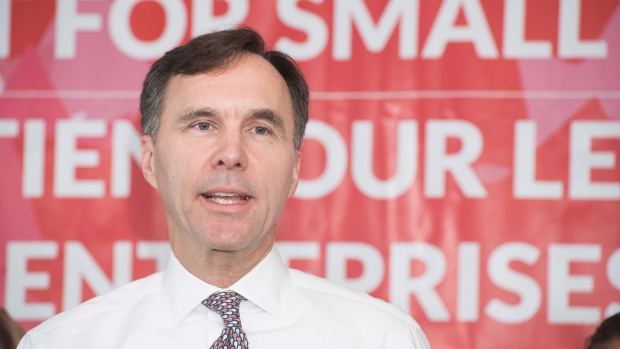 Minister of Finance Bill Morneau speaks to local business owners and media during a press conference at Station 33 Cafe & Yoga in Hampton, N.B., on Wednesday, October 18, 2017. , THE CANADIAN PRESS/Stephen MacGillivray

OTTAWA — Finance Minister Bill Morneau has scaled back one of the most contentious elements of the Trudeau government's tax-reform plan in yet another effort to calm infuriated small business owners.

The move aims to water down Morneau's proposal on passive-investment income, so that only three per cent of the "most-wealthy" privately owned corporations will have to pay higher taxes.

Morneau confirmed the change at a cafe in Hampton, N.B., a small community outside Saint John where locals — including Liberal MP Wayne Long, who represents a neighbouring riding — have been highly critical of the Liberals' overall package of controversial tax proposals.

The event was part of a week-long Liberal effort to introduce tweaks in hopes of quieting the rage surrounding Ottawa's tax proposals. The plan has angered entrepreneurs, doctors, farmers, tax experts and Liberal backbench MPs.

"When you make (a) change, it is difficult sometimes for people who like the status quo," Morneau said, referring to the uproar created over the original proposals announced in July.

"What's most important, though, is that we have a system that works for all Canadians ... We think we've gotten it right."

In an attempt to avoid negative impacts on middle-class business owners, Morneau's latest change will establish a threshold of $50,000 on passive income per year. It will be equivalent to $1 million in savings based on a nominal five per cent rate of return, his department said.

The goal, he said, is to enable small business owners to put money away inside their corporations for the future needs, including retirement, sick leave and parental leave. At the same time, Morneau wants to crack down on the practice of privately held firms using the method purely as a way to reduce the owners' income taxes.

The government will release draft legislation as part of next year's budget.

Dan Kelly, president of the Canadian Federation of Independent Business (CFIB), questioned whether the revised threshold is enough.

"... [W]hile the $50,000 annual threshold will help small firms that remain small, it may be too low for small firms saving to grow and create more opportunities. Canada has a dearth of medium-sized businesses and the size of the threshold may not be enough to help businesses looking to get to the next level,” Kelly said in a news release.

One of the most outspoken critics of Morneau’s tax proposals said he’s encouraged by the latest tweak.

“Unlike the original plan, this new version maintains small and medium-sized businesses’ ability to put money aside for economic hardship, to invest in their operations or to provide for parental leave,” said Canadian Chamber of Commerce CEO Perrin Beatty in a statement. “We’re glad the government has listened."

The tweak comes after a flood of complaints that warned cracking down on passive investments could hurt middle-class entrepreneurs who use their companies to save for economic downturns, leaves and for rainy days.

However, Morneau said Wednesday that 85 per cent of small businesses have no passive investment income at all.

Morneau also released an estimate that suggests between $200 billion and $300 billion in assets are sitting in the passive investment accounts of just two per cent of Canada's 1.8 million private corporations.

This was the government's latest adjustment to its tax proposals.

Prime Minister Justin Trudeau began the week by announcing a reduction in the small business tax rate to nine per cent over two years. He also ditched a proposed measure that would have had a negative impact on the intergenerational transfer of family businesses, like farms.

The government is keeping — but promising to simplify — another proposal, aimed at limiting the ability of business owners to reduce their tax burden by sprinkling corporate income to family members who do not contribute to their companies.

"The only way we get to good conclusions on things that are as complex as this is if members of parliament listen to their constituents, try and understand the issues and come up with ideas around solutions," Morneau said.

Neighbouring MP Long was removed from two committees after voting in favour of a Conservative motion to extend the consultation period on the tax proposals.

Two Saint John doctors, who were refused entry into the tiny cafe where Morneau made the latest climb-down, were still angry about the tax proposals and how physicians have been portrayed over the last few months.

"It was rolled out very poorly and to hear your prime minister in the House of Commons shout out 'wealthy doctors' just makes us feel terrible," said Heidi King, a radiologist.

"We've worked hard to get here. I don't know why success would be punished in Canada. Why would you want to drive away people who work hard?"

Cherie Adams, an emergency room physician, said she doesn't get certain benefits such as maternity leave and she feels the government is still limiting what she can put aside for retirement.

"I feel personally offended being called a tax cheat and taking advantage of loopholes when we're really using legislated tax structure to fund our unique position in the business community," Adams said.