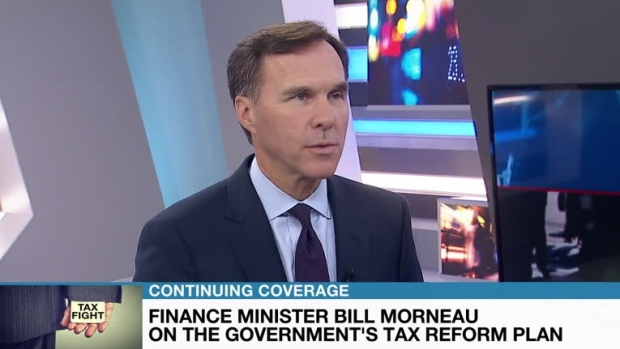 Finance Minister Bill Morneau insists he is working to ensure there are no “unintended consequences” from his proposed changes to small business taxes.

“As we look at the feedback and hear things we will certainly consider changes,” Morneau told BNN in an interview on Thursday.  “You don’t start into a consultation period and say we are going to listen to you but we aren’t going to make any changes.”

Morneau specifically referred to concerns of farmers who say the proposed changes to the tax law would make it more expensive to pass the family farm on to future generations.

“We have heard from farmers that they are concerned they can’t transfer the farm from one generation to the next,” he said. “Of course that was not our intent. We are going to make sure that isn’t the case.”

But Morneau says Ottawa remains committed to the goal of the changes, which is to ensure that small businesses use the funds to invest in their business and not just lower the tax rate on their personal income.

“When a small business owner says ‘I need to be able to have the money to invest in my business,’ I am all in – I want to listen to that, because we want them to do that,” said Morneau.

The government proposals include restrictions on the ability of business owners to reduce their tax rate by sprinkling their income to family members in lower tax brackets, even if those family members do not contribute to the company.

It has also proposed limits on the use of private corporations to make passive investments that are unrelated to the company. A third change would limit the ability of business owners to convert regular income of a corporation into capital gains, which are typically taxed at a lower rate.

The proposed changes have come under fire from small business owners, investors and even backbench Liberal MPs.

The 75-day consultation on the proposals wrapped up on Monday. Critics complained there was not enough time to consider the proposals. But Morneau said taxpayers should not have been taken by surprise since it was a major plank of the Liberal election platform and was included in recent budgets.

Morneau did acknowledge the strong views the proposed changes had elicited and maintains that Ottawa will work to ensure the changes are fair.