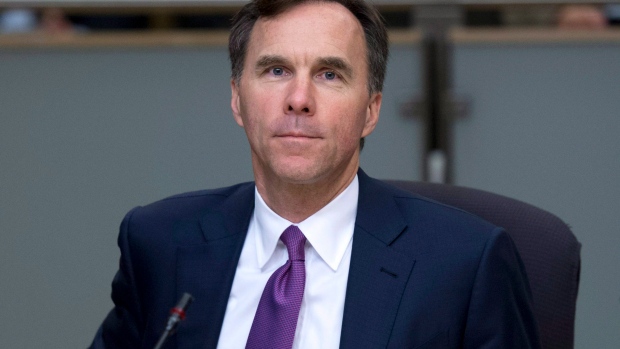 OTTAWA -- The human resources and pension management firm at the centre of the conflict-of-interest controversy raging around Finance Minister Bill Morneau has itself joined the debate.

In a statement today, Morneau Shepell is refuting opposition claims that it has benefited from having its former executive chairman sitting at the Liberal cabinet table.

Political rivals have called on the federal ethics watchdog to investigate Morneau for spearheading pension reform legislation that could benefit Morneau Shepell and, through his personal holdings, the minister himself.

But the company says it wasn't consulted on Bill C-27, even though it has stated its support for the concepts in the proposed legislation.

Morneau Shepell also says it wouldn't expect to see a benefit from Bill C-27, since it would simply give federally regulated pension plans the option to use target-benefit plans, but not require them to do so.

The company also responded to media reports that suggest Morneau Shepell obtained and renewed contracts with the federal government after the Liberals won power.

The statement insists that all the contracts were awarded via the open, competitive government process, while the extensions were reflections of satisfaction in the services it has provided.

"While we understand that we cannot always control the context of how our name is referenced, we will defend our reputation, our employees and our clients," the company says.

Morneau, who built the company alongside his father into a large, successful firm, stepped down as the company's executive chairman shortly after the 2015 election. He was named finance minister a couple of weeks later.

He has denied he was in conflict of interest regarding Bill C-27.

Editor's Note: An earlier version of this story included an incorrect headline. BNN regrets the error.