OTTAWA -- Finance Minister Bill Morneau will introduce the federal government's next budget on Feb. 27 as the country faces persistent uncertainty around trade and competitiveness.

With the future clouded by such unknowns, private-sector experts will press Morneau to keep his fiscal powder dry when they gather later this week for their annual pre-budget meeting.

Morneau, who announced the budget date Tuesday in the House of Commons, sits down Friday in Toronto with leading economists at a roundtable that typically includes about a dozen experts from commercial banks, think tanks and trade associations.

Finance ministers routinely call on outside economists for input and forecasts as part of the budget-writing process. Their projections are averaged to create a fiscal foundation for the budget.

Some economists say that late-2017 improvements in the economy will likely give Morneau more fiscal elbow room in the budget, compared to his October update. Others are less optimistic about the changes in recent months and expect the government to find itself in a similar budgetary position.

Morneau needs to try to rebuild his credibility following the mishandling of controversial changes to the small business tax, Martin Pelletier, Portfolio Manager at TriVest Wealth Counsel, told BNN in an interview on Tuesday.

“It’s been a complete gong show from the tax policies and small business. We have seen the most pervasive tax change in 50 years jammed into a couple of months starting in the summer time. We see it with a lot of clients trying to figure out what to do ahead of tax time.”

Pelletier said he also wants Morneau to provide greater clarity around infrastructure spending and the deficit in the budget:

“If the economy is doing so darn well like he said it is why are they running a deficit?”

Martin Pelletier on federal budget: tax policy has been "a gong show" pic.twitter.com/OWTw5OCPNj

But regardless of the fiscal footing, there's agreement that the government should proceed with caution. They want Ottawa to make sure it's ready for the still-unknown impacts of the drawn-out renegotiation of the North American Free Trade Agreement and the U.S. move to slash corporate taxes.

"Those are definitely the big two -- there's no question about it -- and the kind of chill that that could potentially put on the business investment climate in Canada," said BMO chief economist Doug Porter, whose colleague will attend the Morneau meeting in his place

"That's a tough twosome to deal with." 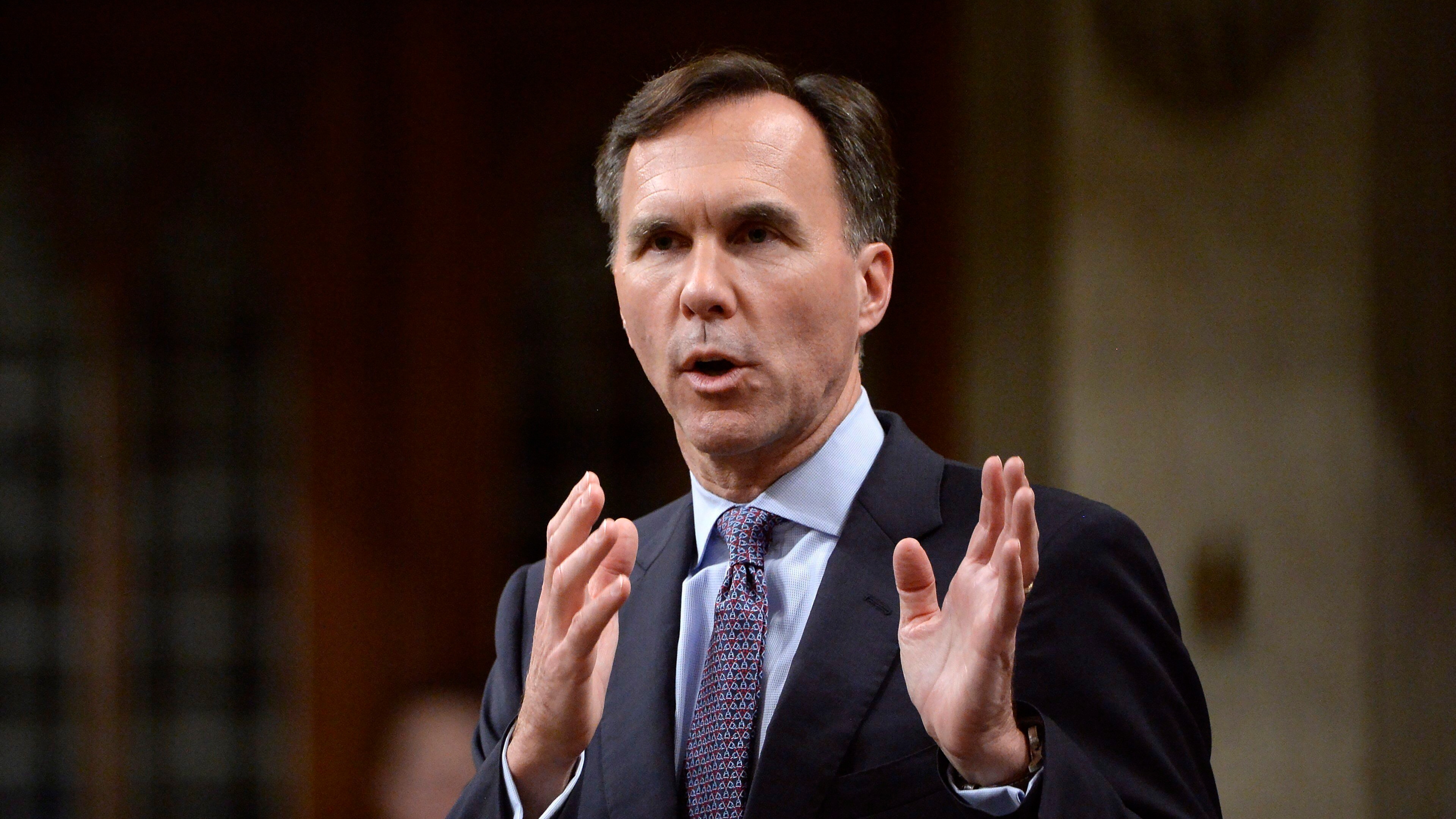 What should be the government's top priority in the budget on Feb. 27?

Last month, the Bank of Canada highlighted the widening negative impacts of NAFTA's uncertain future. The bank not only made a point of emphasizing the potential effects on trade, but also the potential damage on business investment caused by uncertainty itself.

The central bank estimated trade uncertainty would lower investment by two per cent by the end of 2019. It said new foreign direct investment into Canada had tumbled since mid-2016 -- a possible consequence of the unknowns around trade.

The bank also warned that lower corporate taxes in the U.S. could encourage firms to redirect some of their business investments south of the border.

Business associations fear the U.S. tax changes could end up inflicting more damage on the Canadian economy than the possible termination of NAFTA.

Morneau's office has responded to the concerns by arguing that Canada has advantages such as an educated workforce and still boasts a competitive tax rate among G7 countries, even after the U.S. reforms. Ottawa is carefully assessing the U.S. tax changes and will take time to fully understand their potential impacts, his office said in a recent statement.

Pelletier says Morneau would do well to show some tax benefits to "the average Canadian" in the coming budget.

"We already do have an effective corporate tax rate," Pelletier told BNN. "The U.S. has certainly narrowed that gap now, potentially beating us from a competitive standpoint, but [it] would certainly be good to see some direction as to overall tax policy that is more beneficial to the average Canadian that we haven’t seen."

"That’s only going to trickle through the economy when we see GDP numbers in the second half of this year."

Scotiabank chief economist Jean-Francois Perrault said he doesn't think the corporate tax changes in the U.S. will have a major impact on Canada -- but he admits they could.

Perrault, who will attend Friday's meeting with Morneau, recommends the government hold off on any big spending plans just in case it needs to respond with tax measures of its own to keep Canada competitive.

"It would be very prudent for the government to wait until we see if, in fact, there is evidence that what's happening down south in the U.S. is having a detrimental effect on Canadian business," Perrault said.

Former Industry Minister Tony Clement also said he'd like to see more money going back to the taxpayer, adding that the Trudeau government should also be devoting funds to infrastructure projects.

"Taxes are going up, and up, and up. They are spending a lot of their time and energy finding new ways to tax Canadians, so tax relief would be better, especially vis-à-vis what we’re having with the increasing[ly] competitive environment in the United States tax regime," Clement told BNN on Tuesday.

"Respect for taxpayers and reining in unnecessary spending would be nice. We haven’t seen any of that over the last three years, and, really, maybe if you’re going to spend some money: How about [spending it] on infrastructure here in Canada."

Heading into the budget, he thinks the solid economy has given Morneau more fiscal space than he had in the fall.

BNN speaks with TD Bank's Derek Burleton about what Ottawa can do to boost Canada's competitiveness amid the ongoing challenges the U.S. presents through its tax reform and NAFTA.

Porter doesn't think there have been major changes in the government's budgetary outlook since the fall because 2017's surprising strength was largely due to temporary factors. This year, the economy, while still looking relatively healthy, should be a little bit cooler, he added.

Craig Alexander, chief economist for The Conference Board of Canada, predicts the deficit to be about $4 billion smaller in 2017-18.

"But going forward, they're not going to have a lot of extra money in the kitty for new initiatives if they want to keep debt-to-GDP ratio on a downward path," he said.

Following the 2015 election, the Liberal government abandoned pledges to run annual deficits of no more than $10 billion and to balance the books in four years. Instead, it is focused on reducing the net debt-to-GDP ratio -- also known as the debt burden -- each year.

Alexander would like to see Morneau produce a plan to balance the books, while Perrault is less concerned about it as long as Ottawa keeps lowering the debt-to-GDP.

Porter would also like to see an effort to eliminate the deficit because Canada is entering a late stage in the economic cycle -- but it's not his top priority.

"I'm concerned about our tax competitiveness first and foremost, and that's actually where I'd like to see the government concentrate efforts."

On Tuesday, Morneau offered a preview of what the government narrative surrounding the budget will likely sound like.

"We've seen real improvements over the last couple of years for middle-class Canadians -- more confidence and among the lowest unemployment rates in the last 40 years," he said during question period.

"But there's more work to do, Mr. Speaker. On Feb. 27, we're going to announce the next budget to continue our plan."

Conservative finance critic Pierre Poilievre, for one, wasn't about to wait for Feb. 27 to pass judgment on the government's plans.

"This government is spending money it does not have on things we do not need," Poilievre said. "The Conservative message to the government is when you're in a hole, quit digging. The deficit is twice what they promised."