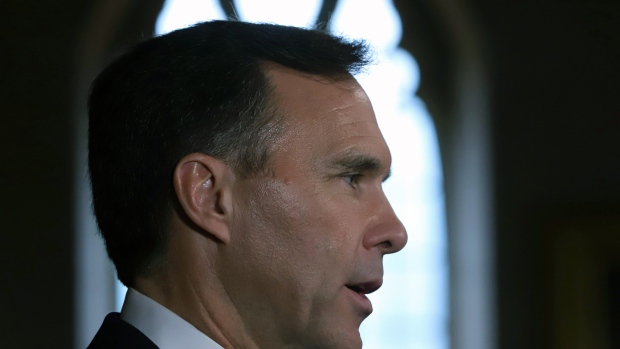 Finance Minister Bill Morneau talks to reporters after he delivered his fall economic update in the House of Commons, Tuesday, October 24, 2017, in Ottawa. , THE CANADIAN PRESS/Fred Chartrand

Canadian government officials reassured Finance Minister Bill Morneau last summer to not worry too much about coming hikes in interest rates, claiming they would be easily absorbed by the nation’s growing economy.

In an analysis delivered to Morneau in August on the impact of higher rates, the finance department said the extent of likely increases -- based on economist expectations at the time -- would be gradual and take place within a backdrop of a growing economy. The memo was obtained by Bloomberg News through a freedom of information request.

The report was produced after a rate hike by the Bank of Canada in July caused some consternation in Prime Minister Justin Trudeau’s Liberal government, with officials fearing higher borrowing costs could inadvertently trigger a downturn.

“Given the slow and gradual character of this expected tightening cycle, it is most likely that the economy will very steadily absorb projected interest rate increases,” the 11-page memo said, citing “gradual adjustments to consumption, savings and investment.”

In fact, on some issues the officials seem to be less concerned than the Bank of Canada. While the the central bank is worried recent interest rates would have a bigger impact because of historically high debt levels, the finance department seems to be downplaying the concern.

“The effect of the initial debt level is small,” the officials said.

The central bank has raised rates twice since its July hike, bringing the benchmark to 1.25 per cent. Since the August memo, the expected profile of Canadian interest rates has shifted up marginally, with some investors anticipating rates could be as high as 2 per cent by the end of 2018.

The complete tightening cycle would have a duration of 18 quarters, which is more gradual than the average tightening cycle of 12 quarters going back to 1987, the report found. It would also leave the final rate well below a peak of 4.5 per cent set in 2007.

Households have ways of mitigating the impact of higher borrowing costs, the report found. About 70 per cent of mortgages are fixed-rate contracts, with most of those for five-year terms so the re-pricing of debt will happen slowly. Some consumer loans meanwhile have options to lock in interest rates, it said.

“Mortgage debt will be slowly re-priced over the medium-term, and in the context of strengthening employment, income, and overall economic growth,” the report said.

Parts of the report were blanked out under exemptions to the information law such as direct advice to a minister, including a review of a potential “Household Deleveraging Scenario.”