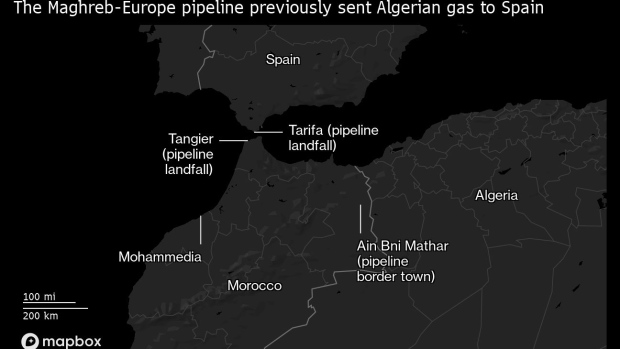 (Bloomberg) -- Morocco is seeking to import liquefied natural gas for the first time using a pipeline that previously sent Algerian supplies to Spain.

Since Morocco doesn’t have any terminals to handle LNG itself, it wants to send cargoes to Spain, where the fuel can be regasified and then piped across the Mediterranean to Morocco.

Prices for piped gas and LNG in Europe have soared in the past year amid a supply crunch and rising tension with Russia over Ukraine. Still, Spain, which holds nearly a third of European LNG regasification capacity, has only a small pipeline connecting it with the rest of the continent. Its import terminals are also under-utilized, meaning they may have capacity to take in gas for Morocco.

Morocco invited a select group of LNG traders to bid for contracts at the beginning of January, Energy Transition and Sustainable Development Minister Leila Benali said in an interview. The government wants to sign deals of at least five years.

“We told them: ‘You can deliver as soon as possible -- either in February or March -- at this port in a neighboring country and we can get it to Morocco,” she said. They could send cargoes directly to Morocco once it has a floating terminal to import LNG, the first of which will be at Mohammedia Port, she said.

The move comes after Algeria halted gas flows through the Maghreb-Europe pipeline, which runs to Spain via Morocco, amid a diplomatic spat between the two North African nations.

“Morocco has requested help to guarantee its energy security based on commercial relations, and Spain has responded positively to the request,” the ministry said in a statement to Bloomberg. “Morocco will be able to acquire LNG in international markets, offload in a regasification plant in Spain and use the Maghreb gas pipeline to send it to its territory.”

While Spain is still able to get Algerian fuel from a separate link known as Medgaz and via LNG ships, Morocco now faces the prospect of shortages.

For the plan to go ahead, Spanish network operator Enagas SA would need to agree an interconnection agreement with Morocco. Enagas, in which the Spanish government has a 5% stake, declined to comment.

Morocco consumes around 1 billion cubic meters of gas each year. Around 60%-80% of that was supplied via the Algerian pipeline to two Moroccan power stations.

While LNG imports would be more expensive than Algerian piped gas, Morocco needs to maintain its power production and ensuring energy security is worth the premium, said Benali.

The country is trying to boost its renewable energy sources, she said. As of 2020, it had more wind power than any other country in the Middle East and North Africa, according to the Abu Dhabi-based International Renewable Energy Agency.