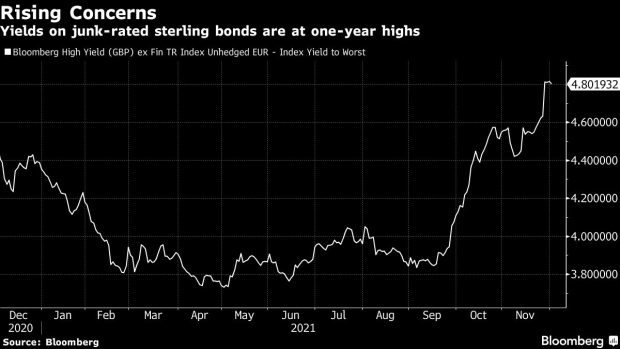 Banks including Goldman Sachs Group Inc. and BNP Paribas were due to start marketing a 6.4 billion-pound ($8.5 billion) syndicated bond and loan financing, Britain’s biggest take-private deal in more than a decade, in November. That has now been pushed back until next year, according to a person familiar with the matter. CD&R and Morrison didn’t immediately respond to requests for comment.

The U.K. grocer’s financing package may include a 2.4 billion pound bond sale which is expected to become one of the biggest in the British currency. Asda Group Ltd issued the largest on record at 2.7 billion pound deal in February. Yields on junk-rated sterling bonds are at one-year highs as investors begin to demand more compensation for risks associated with the currency.

While investors rushed to buy the bonds and loans backing Asda’s acquisition just months ago, they are now grappling with the prospect of accelerating inflation, rising interest rates and fears over the omicron variant. Moreover, Asda’s bonds have suffered since the pricing, which may prompt investors to demand more compensation to buy Morrison’s debt.

The Morrison’s deal postponement should come as no real surprise to the market, according to Mark Benbow, a high-yield fund manager at Aegon Asset Management.

“The deal was touted to be coming a few weeks back and the recent market weakness has clearly put to bed any thought of them bringing the deal this year,” he said. “It’s probably for the best, sentiment is softening and U.K. capital providers have had to take down both Asda and B&M in recent weeks.”

Souring sentiment further in the credit market, bondholders of companies such as Telecom Italia SpA and Marks & Spencer Group Plc headed for the exit late last month on concerns that buyout firms will saddle them with extra debt.

“We’re entering into a LBO dangerzone for bondholders now,” Rodolphe Ranouil, fund manager at Cbh Compagnie Bancaire Helvetique SA, said. “[They] are facing significant repricing risks due to the amount of potential takeover targets that could result in bond prices falling.”

Still, CD&R has funded the deal with more than 3.4 billion pounds of equity, providing some comfort to investors about the firm’s commitment to the acquisition.