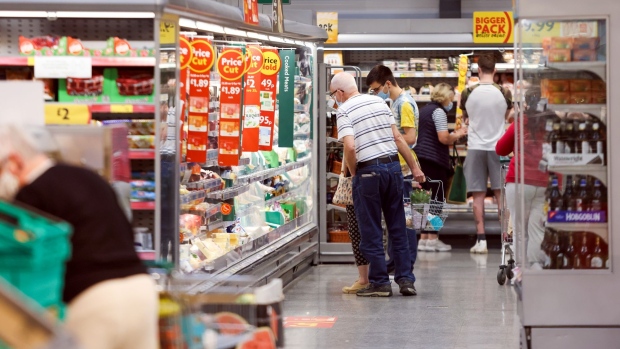 (Bloomberg) -- Lenders are watching the launch of the Wm Morrison Supermarkets Plc debt package for the signals it sends about the viability of other buyouts targeting U.K. firms.

The 6.6 billion-pound ($9.1 billion) financing is slated to come to market around the end of this month, giving time for the grocer to update investors on its Christmas trading performance, according to several bankers close to the deal who asked not to be named because the information is private. That could prove key to stoking appetite for a wide-ranging package in euros and pounds aimed at loan and bond investors.

As the largest leveraged buyout of a British company in more than a decade, the debt sale will lay down markers for other potential transactions targeting famous British retail names such as the Boots drugstore chain and Marks & Spencer Group Plc.

“Morrisons is a bellwether credit,” said Jeremy Duffy, a London-based finance partner at law firm White & Case. “A successful sell-down bodes well for other deals as it will be an encouraging sign for arrangers and market participants that the new year has not brought with it a material negative re-setting of the top of the market.”

In the wake of Brexit, buyout firms are prowling the U.K. for acquisition targets against a backdrop of still abundantly cheap financing conditions and a friendly regulatory framework.

Wm Morrison is set to be a BB- or B+ rated credit for the purposes of its buyout by Clayton, Dubilier & Rice LLC, a U.S. private equity firm, according to a banker close to the deal. If syndication goes well, that could spur lenders to back buyouts of similarly rated companies or even others further down the credit spectrum.

M&S is among other U.K. firms at the center of takeover speculation after the Sunday Times newspaper reported that Apollo Global Management Inc. had been considering a bid for the retailer.

A sale of the firm to private equity would require debt in the region of 5 billion to 7 billion pounds, according to several bankers with knowledge of the leveraged debt market who asked not to be identified given the sensitive nature of the deals.

A buyout of Boots would require debt totaling up to 3.5 billion pounds, they said. Walgreens Boots Alliance Inc. has begun a strategic review of the drugstore business, Chief Executive Officer Rosalind Brewer said this week.

However, just how much debt banks would be willing to commit to these other deals will depend on the reception the market gives to Wm Morrison.

“The market is expecting mass U.K. issuance as private equity looks at the opportunities offered by U.K. corporates, which are priced more attractively since Brexit,” said Zachary Swabe, portfolio manager at UBS Asset Management. “If the first batch of 2022 deals sell well, it will be an encouraging sign for arranging banks and incentivise them to do more staple financings on M&A and public-to-privates.”

Banks including Goldman Sachs Group Inc. and BNP Paribas had started marketing the financing package toward the end of November. That was before the emergence of the omicron Covid-19 variant roiled debt markets and forced them to back away before the package could launch for syndication.