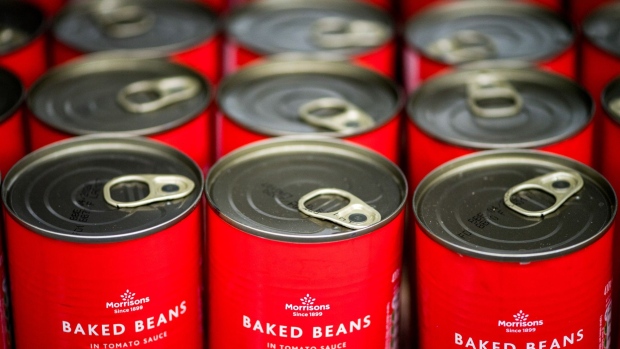 Tins of own brand baked beans sit on a shelf inside a Morrisons supermarket, operated by Wm Morrison Supermarkets Plc, in London, U.K., on Wednesday, Aug. 8, 2018. Morrisons reported a growth in profits in their most recent financial year, boosted by food price inflation. , Photographer: Chris J. Ratcliffe/Bloomberg

(Bloomberg) -- Wm Morrison Supermarkets Plc’s sales slumped in its second quarter as the grocer faced a tough comparison with 2018, when unseasonably warm weather, the World Cup and a royal wedding boosted spending. But it predicted an improvement in the second half, lifting the shares.

To contact the reporter on this story: Ellen Milligan in London at emilligan11@bloomberg.net

To contact the editors responsible for this story: Eric Pfanner at epfanner1@bloomberg.net, Marthe Fourcade