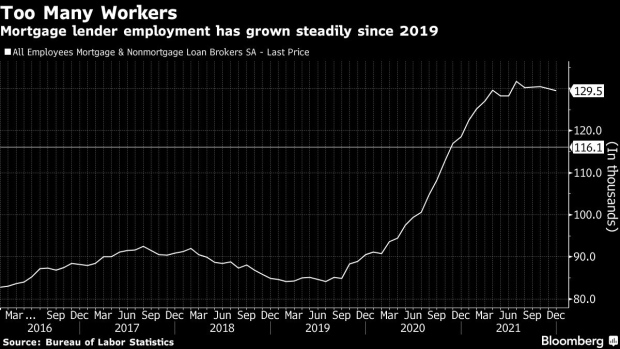 Homes in a subdivision in McDonough, Georgia. , Photographer: Elijah Nouvelage/Bloomberg

(Bloomberg) -- U.S. home mortgage lenders have spent much of the last two years hiring. Now they might have to spend the coming months laying workers off.

The number of people working as brokers for mortgages and other kinds of loans, a proxy for total home lending employment, has surged more than 50% to around 130,000 since late 2019, according to the U.S. Bureau of Labor Statistics. That’s right around the highest level since early 2006, just before the financial crisis.

But mortgage rates have been rising since August, reaching 3.92% last week, the highest since May 2019. With borrowing more expensive, applications to refinance mortgages have fallen about 45% in the last six months, according to the Mortgage Bankers Association.

While some employees can be shunted into other parts of the mortgage business, such as making loans for home purchases, layoffs in the industry are inevitable, said Jeff DerGurahian, chief capital markets officer at LoanDepot Inc., one of the largest lenders to consumers outside of the banking sector in the U.S.

“With rates moving higher, capacity is going to be adjusted across the entire industry,” DerGurahian said.

Job cuts would come in the context of a labor market that’s been strong as the U.S. recovers from the pandemic, with unemployment at just 4% in January. Rising wages are putting pressure on the Federal Reserve to boost rates as soon as next month to help slow economic growth and tame inflation.

Some lenders have already begun to cut back. Mortgage lender Homepoint Capital laid off nearly 10% of its workforce. Better.com, an online mortgage lender, fired around 900 workers in December during an infamous video conference call.

Lenders in general are trying to find more work for their staff by lowering their standards a bit. The credit rating for the average borrower whose loan is bundled into a mortgage bond backed by Fannie Mae or Freddie Mac fell to 733 in January from 750 a year earlier, according to data compiled by Bloomberg. That’s still a prime level for the FICO scale that goes from 300 to 850.

“I don’t see us getting into a credit crisis problem like in 2008, though it may be happening around the edges,” Adelberg said. “It’s more likely that the mortgage lending operation lays off people before they reach that far down the credit spectrum.”

The likely decline in mortgage jobs comes after lenders spent much of 2020 and 2021 staffing up. As the Federal Reserve looked to help ensure the economy didn’t implode during the pandemic, it cut interest rates back to zero and 30-year mortgage rates dropped to as low as 2.65% by early 2021 from above 3.5% in early 2020.

A flood of loans followed, and with lower financing costs, housing sales jumped, contributing to overall U.S. economic growth. About 0.45 percentage point of the 5.7% growth in gross domestic product last year was because of the housing sector, said Cristian deRitis, economist at Moody’s Analytics.

Now volume is dropping. The Mortgage Bankers Association expects volume this year to go down to $2.6 trillion from $4 trillion in 2021.

One area that mortgage employees can focus on more now is mortgages for home purchases, which can take longer to process than refinancings. For a purchase, the underwriter needs to evaluate new appraisal documentation, and look at down payments and other moving costs.

“Although we expect refinancing volume to fall as interest rates rise, purchase volumes remain elevated,” noted Moody’s Analytics’ deRitis. “Purchases are more labor-intensive, which could offset some decline in personnel.”

“Between now and the midyear, there’s going to be continued pressure on a lot of mortgage companies as rates continue to rise,” Elezaj said.

And even if purchase volume is strong now, it might fall in the coming months: in addition to mortgage rates having risen in recent months, housing prices have jumped over the last two years, making homes less affordable.

Another area that lenders might focus on more before laying off staffers are borrowers that can’t document income and therefore don’t qualify for mortgages backed by government-sponsored enterprises like Fannie Mae. The home loans for these borrowers, in particular the ones known as “non-qualified mortgages,” might become a bit more popular.

“With refi volume down, lenders will have to work on something else. We think they could focus on non-QM, which take longer to underwrite,” said Sujoy Saha, RMBS analyst for the structured finance team at S&P Global Ratings.