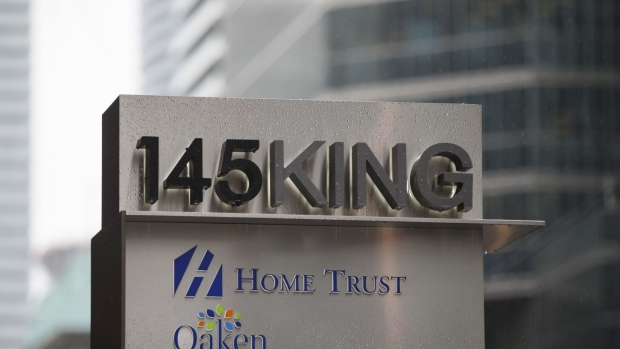 Signage for Home Trust Co., a subsidiary of Home Capital Group Inc., stands outside the company's headquarters in Toronto, Ontario, Canada, on Thursday, May 4, 2017. The downward spiral of Home Capital Group Inc. is rippling across North America as investors and regulators try to piece together the impact it could have on the fastest growing economy in the developed world. , Bloomberg

(Bloomberg) -- Home Capital Group Inc., the Canadian mortgage lender that Berkshire Hathaway Inc. helped rescue five years ago, says it turned down an approach from an unnamed buyer because the price was too low.

Toronto-based Home Capital didn’t disclose the exact amount of the offer but said it was more than C$28.60 a share -- the maximum price on a stock buyback it recently announced. That means the takeover approach valued the company at at least C$1.2 billion ($930 million).

“We believe privately-owned strategic players and private equity are the most likely suitors,” National Bank of Canada analyst Jaeme Gloyn said in a note. Gloyn speculated that Fairstone Bank of Canada, a lender backed by Centerbridge Partners LP, could be an interested party.

Home Capital shares have dropped more than 20% this year and are trading below book value as Canada’s housing market encounters severe headwinds because of rising interest rates. Prices have been sliding for months, especially in urban markets in Ontario, the province to which Home Capital has the most exposure.

The board determined the cash offer “undervalues the company’s shares and falls short of reflecting Home Capital’s intrinsic value and its future growth potential,” Home Capital said in a statement Monday. The unnamed third party had “previously made an unsolicited, non-binding proposal” to buy the company but that offer was subsequently terminated,” it said.

The company, which primarily serves borrowers who can’t easily qualify for mortgages from Canadian banks, nearly collapsed in 2017 after it suffered a run on deposits.

Warren Buffett’s Berkshire bought an equity stake of nearly 20% and provided an emergency credit line to stabilize the firm. But shareholders rejected a proposal to have Berkshire buy an even larger stake, and it exited most of its investment at a significant profit in late 2018.