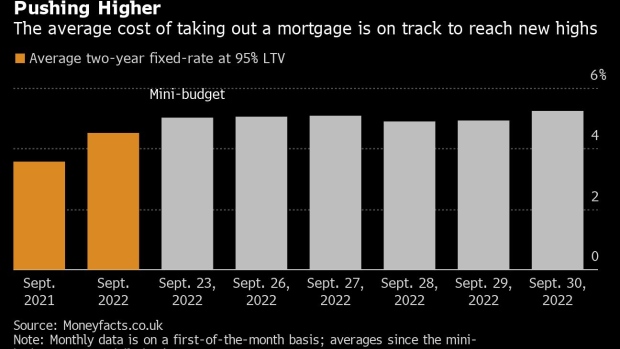 Cars parked outside residential properties in Pimlico in London, UK, on Monday, June 20, 2022. The price of London's swankiest properties gained the most in more than seven-years last month as returning demand for city center homes tempt sellers to cash out. , Bloomberg

(Bloomberg) -- UK lenders are offering mortgage rates not seen in more than a decade as market turbulence continues to upend the housing market.

HSBC Holdings Plc is advertising a two-year fixed-rate deal with 95% loan to value at 6.64% on Friday, while First Direct, a division of HSBC, has a similar deal on offer for 6.24%. Nationwide Building Society was advertising two-year fixed rate deals for 95% LTV at 6.19%.

The average rate for two-year loans at 95% of the home’s value hasn’t surpassed 5.4% since 2008, according to Bank of England data.

“Most people would think 6.5% to 7% would be scarily high,” said Ray Boulger, a manager at loan broker John Charcol. “First-time buyers are those that will be most badly hit as they are often the ones that have to borrow at 95% LTV,” he said.

Such rates are so far limited to a small corner of the market. The 95% loan to value in recent years accounted for a fraction of all mortgage lending, according to Bloomberg Intelligence. At 75% loan to value, banks were typically offering rates ranging from about 4% to 6% on Thursday.

But it caps a wild week that saw some house sales collapse and mortgage costs soar after the UK government’s mini-budget. The average monthly cost of a two-year fixed-rate mortgage may rise by 70% by March from January this year, Bloomberg Economics estimates.

The possibility of 7% rates is raising eyebrows among brokers due to its role in helping regulators determine whether firms can withstand financial calamity.

Starting from 2014, the Bank of England’s Financial Policy Committee required lenders to test whether borrowers could withstand prices at 3% more than the reversion rate in their mortgage contract, usually around 7%. It ended the practice in August as other tests were in place.

The 7% level is also a key element of the Financial Conduct Authority’s regime. Under FCA rules, banks stress test whether mortgage borrowers can withstand rate rises as part of their affordability checks. The FCA doesn’t prescribe this number but typically this rate has been between 6% and 7%, according to a person familiar with the matter.

Representatives for HSBC, the FCA and the BOE declined to comment. First Direct and Nationwide didn’t respond to emails seeking comment.

“Any number above 6% is significant,” said said Andrew Montlake, managing director at mortgage broker Coreco. “People who are re-mortgaging will have a massive payment shock.”

“The rapid and dramatic surge in mortgage rates may provide a significant shock to the housing market that may force many buyers to shelve their buying plans, if they haven’t secured mortgage offers already at lower rates. Transactions may decline sharply with the lower volume more vulnerable to larger price moves.”

“Customers who thought they had their dream home have had it ripped from them,” he said by phone. “We’re talking about families with children starting high school, families of three or four living in a four-bedroom property. It’s a horrible situation for most people.”