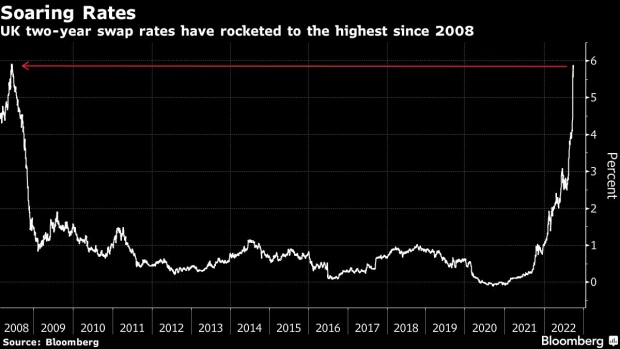 The yield on two-year interest-rate swaps, which lenders typically use to price mortgage products, reached nearly 6% this week and is at its highest level since the financial crisis in 2008. Two-year mortgage costs are still lagging behind at between 3% and 5%.

The dramatic rise in swaps rates suggests banks will have to increase the cost of new mortgages in the coming weeks, once they have exhausted their capacity to write loans at lower levels based on hedges they have taken out. If they do not rise rates, they could have to write those loans at a loss, which would hurt their profits.

The pressure on the mortgage market comes amid other dramatic moves moves in financial markets. The Bank of England intervened on Wednesday to try to stabilize markets and said it would buy long-dated government debt. That did little to move short-dated swap rates and may have limited impact on mortgage pricing.

A string of banks have withdrawn or paused mortgage offers in the past few days in response to growing expectations that the Bank of England will increase interest rates after the UK’s mini-budget shocked financial markets on Friday. Swap rates went up in tandem.

“Unless there’s some sort of reversal by the government, which is unlikely, when mortgage lenders do put products back on the market, there’ll be a jump up in rates,” Laurie Mayers, an associate managing director at Moody’s Investors Service, said in an interview on Wednesday. “All we know is the direction of the swap rates: they’re going higher and there’s going to be a need to price those products at a higher level than was the case before Friday’s announcement.”

“If it was just mortgages that would be bad enough but over last year or so people have seen their energy bills double. It starts to get to the situation where they have to cut back on things that aren’t essential like Netflix and Sky,” Boulger said. “Because the majority of people have a fixed-rate mortgage, and of those five-year fixes have been the most popular, a lot of people aren’t going to see the impact of this for a while, but some will see it very quickly.”

Traders are braced for further drama in the swaps market, with the cost of insuring against turbulence in two-year interest-rate swaps over one month soaring to its highest level since Bloomberg data became available. Banks could begin offering 6% loans as soon as markets show signs of stability, said Geoffrey Yu, a senior strategist at Bank of New York Mellon Corp. in London.

“With high street lenders pulling new offers as they are inundated with demand, we would expect banks to have increased mortgage rates by up to 2% by the time the Bank of England hikes again. Pressure is mounting on first-time buyers, with an extension of the help-to-buy guarantee needed or the small premium to 75% LTV pricing will widen to 150bps or more. That would making affordability near-impossible and hasten a housing decline.”

All eyes are now on whether the BOE will take further action by raising interest rates.  “What we saw on Friday and into this week has been such violent moves in swap rates that banks simply do not have sufficient certainty or time to hedge their loan production,” Douglas Charleston, a partner and portfolio manager at TwentyFour Asset Management, said in a note to clients late on Tuesday. “What lenders need is a short period of stability in swaps allowing them to reprice and relaunch their mortgage products, albeit at materially higher rates.”