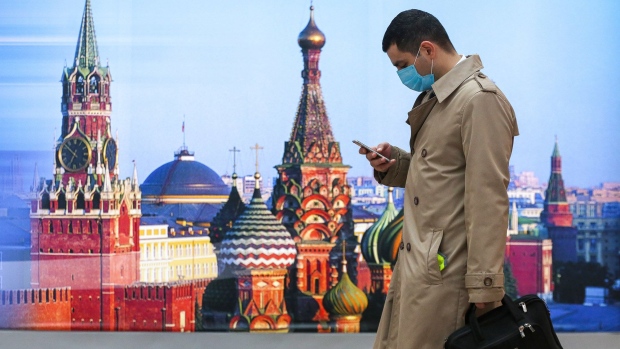 A passenger checks his mobile phone in the departures terminal at Sheremetyevo International Airport OAO in Moscow, Russia, on Friday, Oct. 9, 2020. Russia posted a record number of new Covid-19 cases Friday as the government has resisted returning to a lockdown to battle the second wave of infections. Photographer: Bloomberg/Bloomberg , Photographer: Bloomberg/Bloomberg

(Bloomberg) -- Moscow will implement its harshest lockdown since the early days of the pandemic last year, as Mayor Sergei Sobyanin said on his blog that the Covid-19 situation was developing according to the “worst-case scenario.”

Most shops and businesses except for essential services will shut down from Oct. 28 to Nov. 7, while schools and kindergartens will be placed on vacation, according to Sobyanin. The surrounding Moscow Region will implement similar measures.

The restrictions are more severe than the nationwide non-working days ordered by President Vladimir Putin on Wednesday. Russia posted record numbers of new infections and deaths on Thursday amid a surge in cases unimpeded by low vaccination levels.

“Experience has shown that non-working days are the most effective way to reduce infections and mortality from Covid,” Sobyanin wrote. “They allow in a short time to break the maximum number of chains spreading the disease.”

The Kremlin has resisted ordering a nationwide lockdown in order to avoid the economic fallout, instead placing responsibility on regional officials to announce social restrictions to try to curb the spread of the virus.

Though Russia was one of the first in the world to develop a vaccine last year, the population has been slow to accept it and authorities reluctant to impose mandates. Deputy Prime Minister Tatyana Golikova said Wednesday the percentage of Russians who are either vaccinated or recovered from the virus is just over 45%, far short of the government’s target of 80% of adults by the fall.