Why most Canadians are now better off than most Americans

Everybody knows that the U.S. version of capitalism is rougher and tougher than is the norm in other affluent countries. The rich are richer here, the poor poorer and the welfare state less exhaustive. Not surprisingly, the U.S. scores poorly versus other rich nations in terms of health outcomes, education levels and other such metrics.

Defenders of the U.S. approach can point, though, to the fact that per-capita gross domestic product has remained higher in the U.S. than in all but a few small nations with unique characteristics (Qatar, Luxembourg, Singapore, Switzerland, Norway, etc.) — so much higher that even with the less-equal income distribution here, most Americans continue to have higher incomes than their peers in other large, affluent countries.

Times may be changing, though, and international income comparisons are definitely getting more precise. Five years ago, David Leonhardt and Kevin Quealy of the New York Times showed using numbers from the Luxembourg Income Study Database that the median income in Canada had caught up with that of the U.S. as of 2010, and speculated that Canada had probably passed the U.S. since. (The median is the income of a person in the middle of the income distribution, with as many people earning more as earning less.)

Now there’s more evidence. A report released this summer by the Centre for the Study of Living Standards, an Ottawa nonprofit, contends that as of 2016 Canada had in fact pulled ahead of the U.S. in median household income, with a US$59,438 to US$58,849 advantage in U.S. dollars if (and this is a reasonably big if) you use the Canadian government statistical agency’s formula for converting Canadian dollars into U.S. ones. The study also compares incomes in every percentile of the income distribution, and finds that up through the 56th percentile Canadians are better off than their U.S. counterparts. 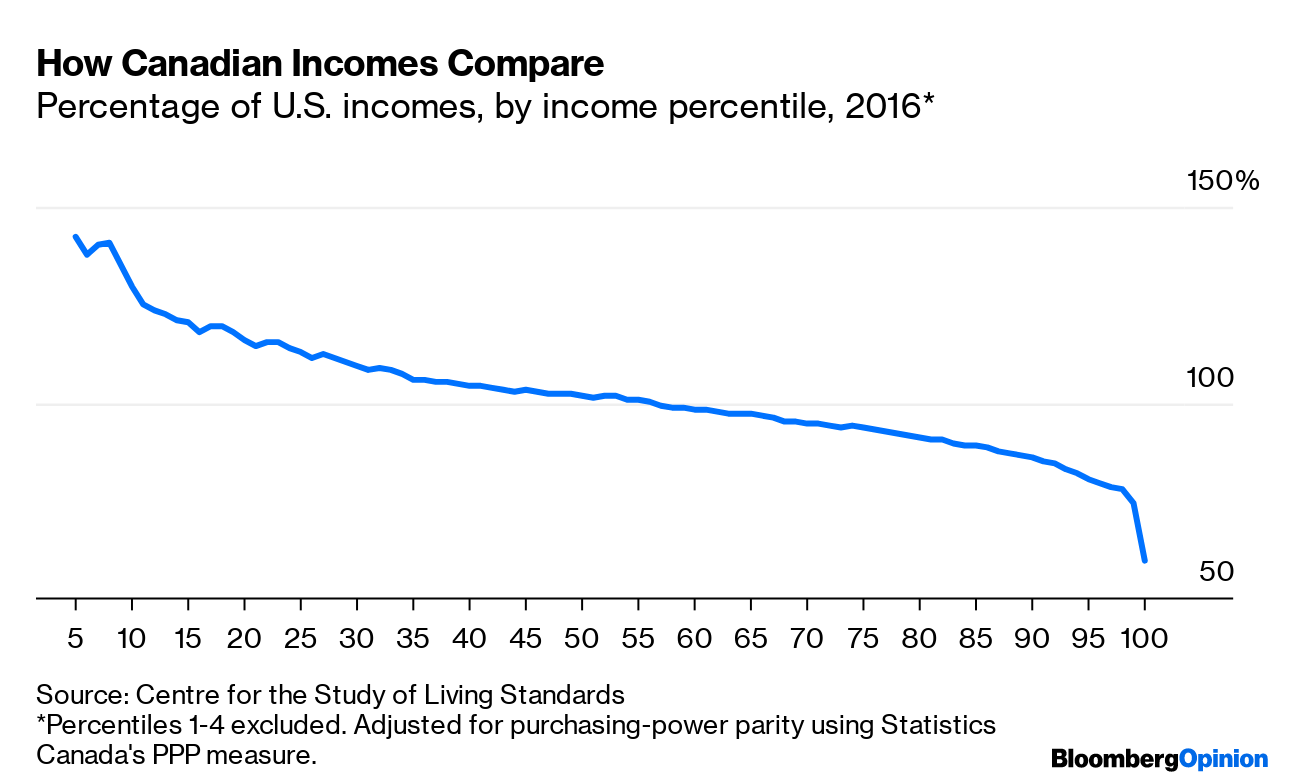 I left off the first through fourth percentiles because (a) incomes in the first percentile were negative, which messes with the calculations and (b) Canadian incomes were so much higher for percentiles two through four (2,579 per cent, 348 per cent and 182 per cent of U.S. incomes, respectively) that it was hard to make out the rest of the chart.

To get a sense of the actual incomes we’re talking about here, here are the averages for every decile of the income distribution: 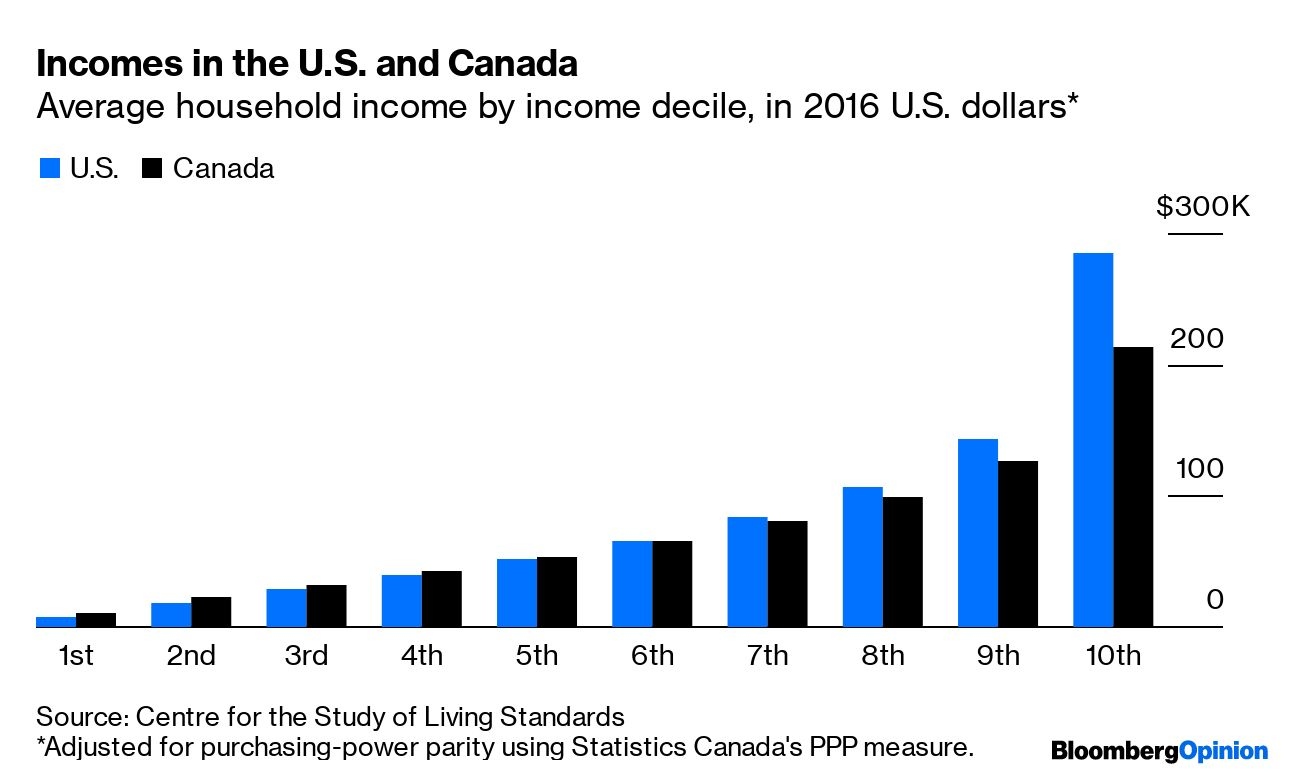 As I mentioned above, these results are dependent on how you convert Canadian dollars into U.S. dollars. If you used the average exchange rate for 2016, Canada’s median household income would be just US$53,336 in U.S. dollars, well short of the U.S. median of US$58,849. But because exchange rates jump around a lot, and don’t always reflect the relative purchasing power of people in different countries, those making international comparisons of incomes usually adjust for what’s called purchasing-power parity, or PPP. Use the Organization for Economic Cooperation and Development’s PPPs, and Canada’s median moves up US$54,868 in U.S dollars, still falling short. The study’s author, economist Simon Lapointe, instead chose to use Statistics Canada’s PPP measure because, he writes:

Since the estimates of PPPs provided by Statistics Canada are derived bilaterally, prices in other countries have no chance at “contaminating” the comparison of prices between Canada and the United States. Moreover, Statistics Canada improves the accuracy of the PPPs by using a larger number of price quotes than the OECD.

If you choose to chalk all this up to pro-Canadian bias, be my guest. But I actually find it plausible that statisticians in Ottawa would do a more comprehensive and thus better job of comparing purchasing power in Canada and its far-and-away-largest trading partner than statisticians at OECD headquarters in Paris who are doing this for 50 countries. What’s more, Lapointe writes:

Our income estimates may actually underestimate the economic well-being of Canadians relative to Americans. Indeed, Canadians usually receive more in-kind benefits from their governments, including notably in health care (as noted also by Wolfson and Murphy, 1998). Had these benefits been included in the estimates, the median augmented household income in Canada would likely surpass the American median by a greater margin. While these benefits also come with higher taxes, the progressivity of the income tax system is such that the median household is most likely a net beneficiary.

Finally, and this is of course totally anecdotal, but I think most Americans who have visited Canada lately would attest that it feels like a more broadly affluent place than the U.S. does. That is, the claim that most Canadians are more prosperous than most Americans is not patently unreasonable.

It’s not just in Canada that those in the middle of the income distribution have been gaining on their American peers. From 1990 through 2018, according to the World Bank, per-capita real gross domestic product grew at the same 1.5 per cent annual rate in the U.S., the European Union and the OECD, which counts 36 affluent democracies on five continents as members. In other words, the rough-and-tough U.S. approach to capitalism hasn’t delivered faster per-capita growth, and because growth in the U.S. has been concentrated at the very top of the income distribution, that means Americans in the middle and the bottom have been losing ground to their counterparts in other countries.

As of the mid-1980s, according to Luxembourg Income Study data originally compiled for the Times’ 2014 article, those in the bottom 20 per cent of the income distribution in Canada and at least five European countries were on average better off than the bottom 20 per cent in the U.S., but by the fourth decile (30th percentile to 40th percentile), average U.S. incomes were higher than all but Luxembourg’s. By 2010, U.S. fourth-decilers had also fallen behind Norway, Denmark, the Netherlands and Canada.

Given the excruciatingly slow pace of economic growth in Europe after 2010, I would guess that the continent’s catch-up march has slowed or stalled since then. My reading of another data source, the World Inequality Database created by French economist Thomas Piketty and several collaborators, is that the middle 40 per cent of the income distribution (the 30th percentile to the 70th percentile) in the Netherlands passed the U.S. middle 40 per cent in 2007, then fell behind again in 2013. Still, the long-run trend is important.

The bottom line: When it comes to improving the lives of the middle class, other rich countries have been doing a better job than the United States.