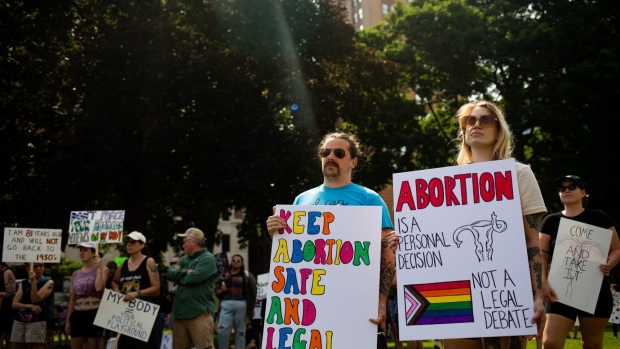 Abortion rights demonstrators during a national day of protest in Lansing, Michigan, US, on Monday, July 4, 2022. Since the US Supreme Court struck down the federal right to abortion last week, the legal fight has quickly shifted to the states as judges blocked or cleared the way for so-called trigger laws that revived tighter restrictions on the procedure. , Bloomberg

(Bloomberg) -- A majority of Michigan residents who identify as Catholic say they are likely to join the majority of voters supporting an amendment that would add abortion protections to the state constitution, a poll released Thursday shows.

Overall, 64% of Michigan residents and 57% of Catholics say they are likely to support the amendment and only 29% of Catholics said they will likely vote no — even though the official position of the Catholic church is to oppose abortion. The same poll showed that 56% of Protestants say they will vote in favor of the amendment as will 83% of voters with no religious preference, according to the results from EPIC/MRA, which conducted the poll of 600 likely voters from September 15-19 on behalf of the Detroit Free Press and several TV stations.

Michigan is one of six states where abortion rights are on the ballot this year. Michigan’s ballot measure would protect the right to abortion as part of other reproductive care services. The referendum would still allow the state to regulate abortions in certain circumstances after the point of fetal viability — when a baby can survive outside the womb.

Supporters say the purpose of the amendment is to regain protections lost after the US Supreme Court overturned the Roe v. Wade ruling that had given federal protections for abortion rights for the previous 50 years. Opponents have labeled the Michigan amendment “extreme” and say the wording may also lead to the repeal of Michigan abortion laws such as those that require parental consent if a person seeking an abortion is younger than 18 years old.

The Michigan Supreme Court ordered the measure be placed on the November ballot after a state canvassing board deadlocked along party lines. Republican members sought to disqualify the proposal based on typographical errors they said made the measure unclear. The overall support of 64% of voters is slightly lower than the 67% who said they would vote for the proposal in late August, before the measure was approved for the ballot. The difference is within the 4 percentage point margin of error for the survey.