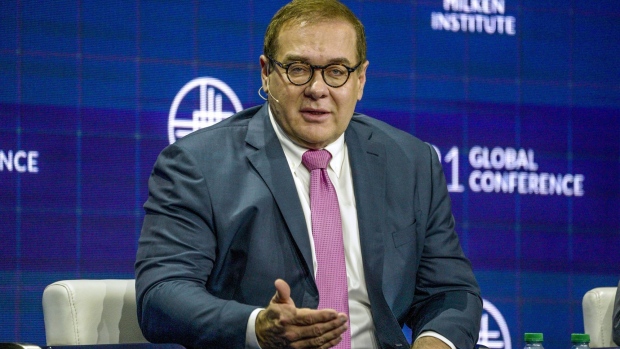 Scott Minerd, chairman of investments and global chief investment officer of Guggenheim Partners LLC, speaks during a panel discussion at the Milken Institute Global Conference in Beverly Hills, California, U.S., on Monday, Oct. 18, 2021. The event brings together individuals with the capital, power, and influence to change the world and connects them with those whose expertise and creativity are reinventing health, finance, technology, philanthropy, industry, and media. Photographer: Kyle Grillot/Bloomberg , Bloomberg

(Bloomberg) -- The majority of cryptocurrencies are worthless and will fail, with just a handful of big winners remaining, Guggenheim Partners Chief Investment Officer Scott Minerd said.

Similar to the dot-com boom of the late 1990s, the world of digital currencies will produce some breakout successes like Amazon.com Inc., which went public in 1997, while most of the field will fade away, as Pets.com did, Minerd said Tuesday.

“Seventy percent of the coins are garbage and will go away,” Minerd said in a Bloomberg Television interview from the Milken Institute Global Conference in Beverly Hills, California.

Bitcoin -- which was trading around $62,000 after the debut of the first U.S. Bitcoin-linked exchange-traded fund on Tuesday -- is hardly a value play, Minerd added, though he said he wouldn’t recommend shorting it.