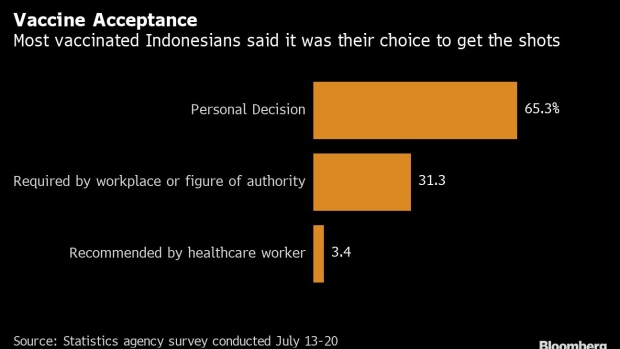 A health worker hands over a dose of the Sinovac Biotech Ltd. Covid-19 vaccine to a colleague at a vaccination center set up at the Teraskota shopping mall in Tanggerang, Banten, Indonesia, on Wednesday, July 28, 2021. Southeast Asia's biggest economy has become a new global virus epicenter after exceeding Brazil and India in daily case and death counts earlier this month. Photographer: Dimas Ardian/Bloomberg , Bloomberg

(Bloomberg) -- Most Indonesians cited a lack of available doses as the reason why they’re not vaccinated against Covid-19.

Among those who haven’t had their shots, 80% said they’re waiting for their appointment, are looking for available doses or haven’t been able to get inoculated due to other reasons, including health conditions or lack of transport. In the July survey done by the statistics agency, the other 4.2% said they doubt the vaccine’s efficacy while 15.8% are worried about side effects.

The world’s fourth-most populous nation seeks to quicken its vaccine rollout as the coronavirus kills thousands of Indonesians each day. The country tops the world’s daily Covid-19 death toll. As countries like the U.S. grapple with people refusing to get the shots despite ample access, developing countries are hampered in their pandemic response by the global divide in vaccine supply.

About 8% of Indonesians are fully vaccinated, compared with nearly 50% in the U.S. The Southeast Asian country plans to administer 2.5 million doses a day in August and September and expects the capital Jakarta and tourist destination Bali to be “100% inoculated” by the end of the month, said Health Minister Budi Gunadi Sadikin, without saying whether he means for both doses or just one.

In a small study done at a public hospital in Jakarta, 88 of the 89 people who died of Covid-19 hadn’t been vaccinated, while one had received one shot. The study involved 928 patients admitted to the hospital from March to June.

Indonesia is mostly relying on the Chinese-made Sinovac Biotech Ltd. as well as AstraZeneca Ltd. shots. The country is seeking to become a regional production hub for mRNA vaccines, with a due diligence currently being done by state-owned PT Bio Farma, Sadikin said.

The statistics agency survey on people’s views toward vaccination involved 212,762 respondents across Indonesia and was done on July 13-20.