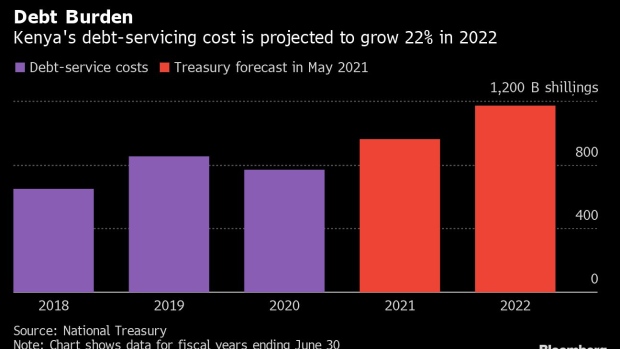 (Bloomberg) -- As Kenya gears up for elections next year, most citizens are disenchanted with the direction the country is taking, with ballooning public debt, high living costs, rampant unemployment, the coronavirus pandemic and corruption among their main concerns, an opinion poll showed.

Just 12% of 1,550 respondents canvassed by Nairobi-based Tifa Research June 24-28 said Kenya was on the right course, while 72% said it was on the wrong path. Almost half of respondents identified the construction of new rail links, roads and other infrastructure as President Uhuru Kenyatta main accomplishments.

Kenyatta is due to step down after serving two five-year terms, with his deputy William Ruto and opposition leader Raila Odinga among the leading contenders to succeed him. Just 10% of those surveyed credited the president with forging national cohesion, despite his efforts to reconcile with Odinga after a disputed 2017 vote.