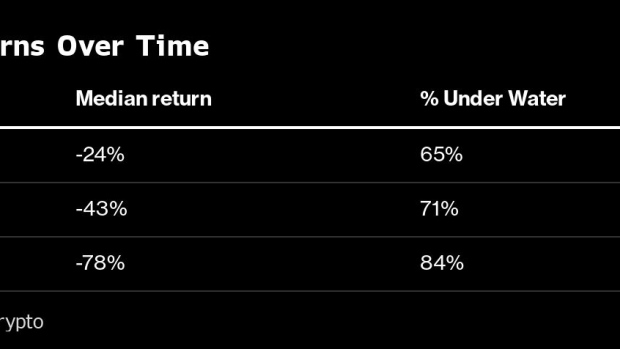 (Bloomberg) -- About 80% of freshly minted cryptocurrencies are underwater and their average returns are close to zero relative to Bitcoin within a year, according to a Jump Crypto analysis.

While there are a few high-profile outliers, the majority of new coins were underperforming within the first month, the public-facing crypto brand for Jump Trading Group found, after analyzing 3,759 tokens -- excluding assets like stablecoins -- that were listed on CoinGecko and CoinMarketCap between the middle of 2013 and the end of last year. Jump measured returns from the token’s inception through the end of 2021.

Bitcoin, which was priced around $100 in the middle of 2013, reached an all-time high of almost $69,000 in November. The largest cryptocurrency by market value traded at about $39,500 on Thursday.

The review does appear to have somewhat of a silver lining, however: It doesn’t matter if a token was purchased in a bull of bear market, or if it performed well prior to a purchase -- a sign of an efficient market, Jump found.

“The market for new tokens looks surprisingly efficient, in that returns are neither systematic nor predictable,” Jump said in the report.

Jump did the analysis from the perspective of a “mainstream”  Bitcoin investor, who they said measures their returns to holding a new token in Bitcoin-denominated terms. The methodology takes into account general market sentiment for Bitcoin and the other cryptocurrencies, Jump said.