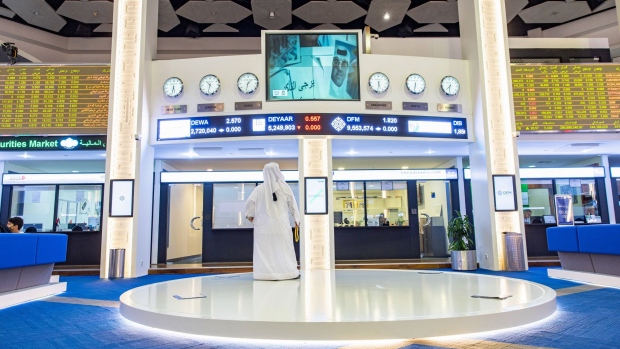 An investor looks up at a television news report at the Dubai Financial Market PJSC (DFM) in Dubai, United Arab Emirates, on Wednesday, Aug. 24, 2022. While not as intense as in other parts of the world, inflation is percolating in the oil-rich Gulf, with Dubai among countries in the region that have set aside billions of dollars in inflation relief. Photographer: Christopher Pike/Bloomberg , Bloomberg

(Bloomberg) -- A flurry of initial public offerings in Dubai this year promised to revive the city’s trading volumes and help deepen capital markets. Now, the majority of those newly listed shares are trading below their IPO price as oil declines weigh on appetite.

The latest to list is private school operator Taaleem Holdings, which dropped as much as 13% on its trading debut after raising $204 million from an initial public offering.

While share sales have plunged to a two decade-low in Europe because of roaring inflation, rising interest rates and a grim economic outlook, the Middle East has largely escaped the turmoil and has attracted investors from elsewhere. Now a decline in oil, the result of mounting headwinds in both the US and China, is making the investment outlook more challenging.

“Global equities and oil prices have been weak and Dubai’s listings are not immune from that,” Hasnain Malik, a strategist at Tellimer in Dubai, wrote. “Dubai’s recent IPOs, which were oversubscribed, may also have seen the exit of retail investors speculating on quick returns and their replacement by an institutional base which is more picky about valuation.”

IPOs in the wider Middle East have fetched billions of dollars so far this year. The energy-rich region has been a rare bright spot for IPOs, with a surge in oil prices earlier this year boosting Gulf economies and stock markets.

On Monday, Morgan Stanley analysts cut their outlook for Middle Eastern equities, including in Saudi Arabia, Qatar and Kuwait. Within that context, however, they did keep the United Arab Emirates, of which Dubai is a part, as their top regional pick.

“After an exceptional year for Middle East outperformance, we see limited 2023 upside on shifting global and local tides,” analysts including Marina Zavolock wrote in a note. “The UAE’s valuations remain most attractive within the Middle East.”