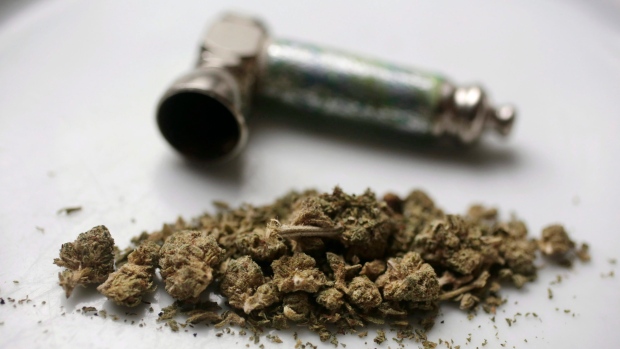 In this June 20, 2018, file photo, marijuana and a pipe used to smoke it are displayed in New York. The office of Manhattan District Attorney Cyrus R. Vance, Jr. announced a new policy of not prosecuting marijuana possession and smoking cases, effective Wednesday, Aug. 1, 2018. , The Canadian Press

OTTAWA -- About two-thirds of casual cannabis users say they didn't spend a dime on the drug in the past three months, Statistics Canada reported Thursday as it provided the most detailed picture to date about Canadians spending habits ahead of legalization next week.

Those who used the drug more often were more likely to pay more.

And those who spent nothing were likely the beneficiary of a sharing culture among marijuana users, Statistics Canada said.

The spending figures released days before cannabis is legalized will become even more detailed after Oct. 17 as the agency and others try to get a handle on the market and what it means for policy makers, companies, consumers and the economy.

Statistics Canada officials say they plan to pull point-of-sale information from legal cannabis purchases to figure out how much people spend, its impact on the economy and provide a way to capture what's left of the black market.

Trying to get a handle on cannabis statistics has been no easy task.

Statistics Canada has relied on crowd-sourced data, but that will change next week when stores, provinces and territories start supplying details about sales.

The agency says about 4.6 million Canadians over age 15, or about 15 per cent of that age group, reported using cannabis in the past three months, mirroring similar numbers from earlier this year.

Some of the agency's work on cannabis spending and consumption were used as part of a report released Thursday by the C.D. Howe Institute that argues some users will continue to spend money in the illegal drug market the Liberals hope to quash through legalization.

The authors estimate the black market will be valued at $2.5 billion in the first year of legalization due to a mix of supply and availability issues in the legal market, shifting tactics in the illegal market, and the lack of federal regulations for edibles. That would mean $800 million in lost tax revenues for Ottawa and the provinces.

How Statistics Canada plans to collect information starting next week could test the report's conclusions. Jim Tebrake, a director general at Statistics Canada who oversees cannabis data, said the agency could use supply figures from producers, sales data from retailers and self-reported spending information to see if there are purchase outside the legal market.

"Those are the different things we're testing. Not totally sure that's going to work, but that's something that we're working on," he said during a special roundtable on the agency's modernization efforts.

As part of those efforts, Statistics Canada is experimenting with a number of new ways to get information from Canadians without having to call them up at home, among other traditional collection methods. For instance, officials said they are running a pilot project at border crossings to ping travellers' mobile devices to get more details about tourism.

The national statistics office can compel any private company in the country to hand over data and plans to test the reach of its legislative authority by turning first to online platforms like Airbnb and Uber before asking larger foreign-based companies like Google for access to their data holdings on Canadians.

Statistics Canada will launch national consultations next week as part of the agency's centennial to learn more about the information needs of Canadians so that it can better tailor its programs.