Most U.S. equities declined and Treasury yields rose as investors weighed inflation risks and the potential impact of a minimum corporate tax that could enable foreign governments to impose levies on big American companies.

The S&P 500 fell, after earlier climbing toward an all-time high, with decliners outnumbering gainers by about 2-to-1. The Dow Jones Industrial Average also fell, with 20 of its 30 members closing lower. The Nasdaq 100 turned higher as Biogen Inc. surged after its Alzheimer’s drug was approved, lifting other biotech stocks as well. Ten-year U.S. Treasury yields rose from the lowest since late April after Treasury Secretary Janet Yellen said on Sunday a slightly higher interest-rate environment would be a plus.

The pullback in equities comes as recent data, including Friday’s jobs report, seemed to vindicate the Federal Reserve’s dovish stance on monetary policy. Investors are trying to strike a balance between the potential for higher interest rates and not missing out on a rally driven largely by massive government stimulus. The U.S. consumer-price index report due Thursday will be one of the last major economic indicators released before the Fed’s rate decision later this month.

“Though the jobs numbers were a bit of a mixed bag, they suggested solid progress but room for improvement, which could temper action on behalf of the Fed,” said Chris Larkin, managing director of trading and investing product at E*Trade Financial. “As we hover around record highs, keep in mind that it’s normal for the market to take a bit of a breather as we kick off the week.” 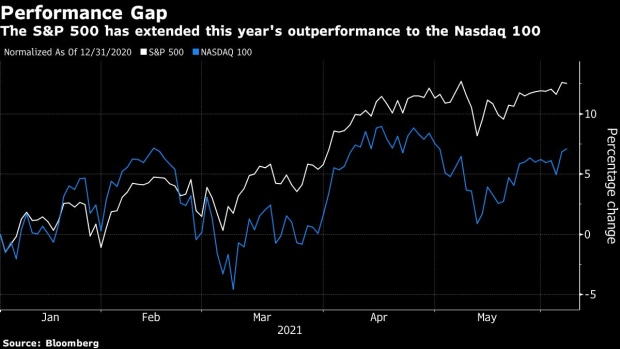 Yellen said President Joe Biden should push forward with his spending plans even if they spark inflation that persists into next year. Meanwhile, the Group of Seven rich nations secured a landmark deal that could help countries collect more taxes from big firms and enable governments to impose levies on U.S. giants such as Amazon and Facebook.

Biogen Inc. rose the most since November after it received approval for its controversial Alzheimer’s disease therapy. Competitors including Eli Lilly & Co. and AC Immune SA also rallied, helping push the Nasdaq Biotech Index toward the highest since late April. Tesla Inc. staged a late-day rebound, closing higher after earlier slumping on news that the lectric-car maker had called off plans to build a longer-range version of its high-end sedan.

The Russell 2000 Index rose for the third straight session on Monday, though it remained more than 1.5 per cent below its June all-time high. European stocks advanced, with carmakers and consumer-products companies outperforming.