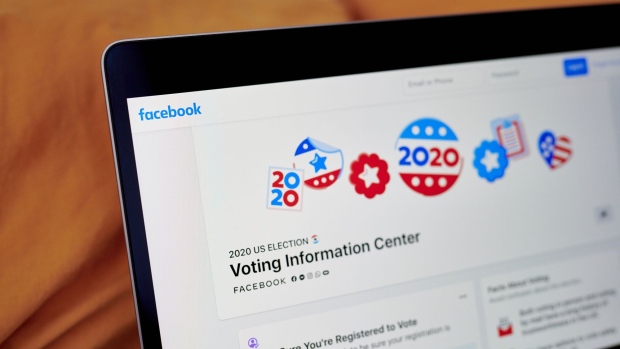 (Bloomberg) -- With the U.S. presidential election just over a week away, Americans are still encountering disinformation and misinformation online, especially on Facebook Inc., and many believe what they read, according to a survey released on Monday.

The SurveyUSA poll of more than 3,000 registered voters found that 65% reported seeing political disinformation in their Facebook feeds. A quarter of them reported believing the claims. Conducted between Oct. 14-19, the survey revealed that 85% of registered voters read that mail-in voting will lead to voter fraud, with 35% believing it.

Facebook and Twitter Inc. have been working to stem misinformation on their sites in the run-up to the election. Both social media companies have become more assertive in flagging posts that violate their policies. Facebook recently started pulling comments that call for people to aggressively police polls on election day and has blocked ads discouraging vaccine use. One of its most controversial moves was to limit the reach of a New York Post article about Democratic presidential candidate Joe Biden, which infuriated conservatives.

“There is a democratic emergency happening in America right now, and Facebook is at the center of it,” said Fadi Quran, campaign director of Avaaz, an online activism group that commissioned the survey. “Facebook can urgently downgrade the super spreader pages reaching millions with misinformation and they can show corrections to everyone exposed to these lies.”

According to the survey, almost three quarters of those polled were exposed to the claim that Biden is planning to defund the police, with 32% accepting this as fact. More than 60% read online that President Donald Trump will end Social Security benefits if re-elected and 27% believed this, according to the survey.