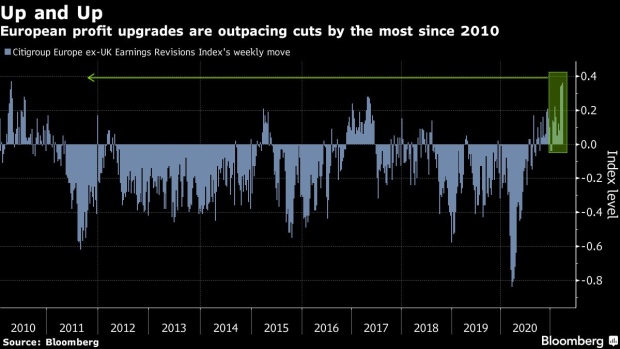 (Bloomberg) -- Europe’s vaccine campaign may be beset with delays, communication blunders and missteps, but in markets at least investors are united in wagering that the pandemic is on the way out.

Stocks in the region have vaulted back to records, and the euro capped its best week against the dollar so far this year. A big turnaround in projected profits for corporate Europe shows a brewing recovery in the investment and consumption cycle.

Analysts are ratcheting up estimates for European miners, banks, auto makers and oil producers -- all industries set to boom as the global economy roars back to health. Upgrades now outnumber downgrades by most in over a decade, according to data from Citigroup Inc.

Whether all that enthusiasm is justified will become clearer this month, when earnings season kicks off. Behind the bullish shift in markets is a belief that Europe will be successful in immunizing the bulk of its population within a few months, and evidence that the U.S. and Asia are on a solid path of recovery.

“The market rightly anticipates accelerating earnings growth,” said Olga Bitel, global strategist at William Blair Investment Management. “The difference this time is magnitude. Specifically, the U.S. and Europe are likely to experience the mother of all recoveries over the next several years.”

The gains across European markets show sentiment is turning positive after a delayed start to immunizations and mistrust over the AstraZeneca Plc vaccine’s side effects. Now, signs are emerging that Europe’s vaccine campaign might be getting back on track.

France met its goal of inoculating 10 million people a week ahead of schedule and Germany has doubled its pace of vaccinations. Germany’s export-led economy is also getting a boost from the wider economic recovery, helping lift inflation expectations. The country’s 10-year breakeven rate is at 1.35%, near the highest since 2014.

Granted, European markets still look sleepy compared with elsewhere. The euro isn’t far from its five-month low against the dollar, and there’s no sign of a speculative frenzy bubbling up anywhere in equities. Instead, the investment case for Europe is often one about valuation discounts.

The region has been so battered, whether from the pandemic, bureaucratic infighting, vaccine delays or fiscal restraint, that it doesn’t take much to spark a turnaround. And at a time when China and the U.S. are booming, bulls believe Europe can ride the momentum too.

To bet on the comeback story, JPMorgan Chase & Co.’s equity derivatives team has told clients to buy calls on the Euro Stoxx 50 and sell them on the S&P 500. The bank’s strategists tout Europe’s cyclical bent and relative cheapness as all reasons why stocks can keep outperforming.

For now, all eyes are on consumer spending. In the U.K., shops, gyms and hairdressers reopen on Monday, and the summer months will be a litmus test if shoppers are ready to splash out on holidays and new clothes.

Airlines and mall owners have already soared from investors betting normal life can quickly return. Bonds of EasyJet Plc and U.K. property manager Hammerson Plc are among the best performers in Europe this year.

Bond Investors Are Already Betting on Return to Normal Life

“As long as the vaccine rollout continues to progress, we would expect to see consumers start to spend,” said Niall Gallagher, an investment director of European equities at GAM.