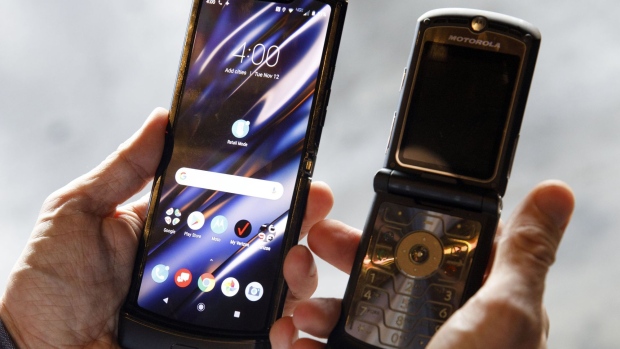 (Bloomberg) -- As smartphone sales have slowed in recent years, designers have been looking to reinvent the category. But Motorola’s new $1,500 Razr shows there’s a long way to go before flagship devices like the iPhone are disrupted.

The Razr is the third foldable Android phone launched by a big-name brand in recent months. The first attempts from Samsung and Huawei transformed into tablets, whereas the Razr is more of a foldable phone. Its 6.2-inch screen shuts into a small square, about half the size of an iPhone 11 Pro Max, and it benefits from deep nostalgia for the original Razr flip phone that defined the pre-iPhone era in the U.S.

Novelty and portability are pluses, but that’s not enough for a $1,500 handset. As solid as it feels when shut, it’s decidedly flimsy in the hand when opened up. The foldable screen — which Motorola stresses is built to withstand daily use — feels like it might work well for several months, but not for years. Smartphone buyers increasingly expect their devices to last as long as four years, especially the most expensive models. The Razr doesn’t immediately convince that it can hold up over time.

Even if durability wasn’t a concern, Motorola’s Razr suffers from compromised specifications. Its 2,510mAh battery is behind the times for a device of its size, its camera underwhelms, the Android 9 Pie operating system is not the latest and its Qualcomm 700-series Snapdragon processor isn’t top of the line despite the phone’s premium price.

Samsung launched the Galaxy Z Flip on Tuesday with a similar square shape, but its inner display is larger at 6.7 inches and has a glass rather than plastic screen. In the hand, Samsung’s offering feels more refined and reliable. With a better processor, bigger battery and a price more than $100 less, the Z Flip instantly vaults ahead of the Razr.

As early users of the Moto Razr have noted, the phone makes a slight, unnerving cracking sound when opened and closed. That’s something users will need to get used to. If you rub your finger along the plastic inner display, you’ll feel lumps that are part of the phone’s mechanism. Motorola says that’s normal, but it’s another something you’ll need to get used to. The upper part of the screen feels more solid when pressed than the bottom half, and the entire panel is a fingerprint magnet. The elongated screen also hampers ergonomics when trying to type something on the keyboard.

The good news about the display is that its two creases can only really be seen when the screen is off. That’s a step forward from Samsung’s 2019 Galaxy Fold. Moreover, like the Fold and the Z Flip, the Razr’s screen is protected from scratches and accidental fumbles in a way that a device that doesn’t fold inward is not.

Motorola’s experimentation with foldable touchscreen technology is commendable, and making it happen inside a device that closes up into a cute square is equally impressive. There’s an undeniable tactile appeal to answering and ending calls by opening and slamming a phone shut, but it’s not of huge importance in an era when most people jump directly to Twitter, TikTok or their texts.The Razr simply feels too flimsy and compromised. Its trade-offs are far too high for anyone to make the switch from an iPhone, Samsung or even one of Motorola’s own, more conventional smartphones.

Foldable phones certainly have their benefits, but at this point they’re like expensive weekend cars: something additional to your daily driver and not yet essential to most people. Smartphone makers are making fast strides toward ironing out the impracticalities and compromises, and once they do, there’ll be plenty of people ready to buy in. But Motorla’s revived Razr isn’t the product to mark that inflection point.

To contact the author of this story: Mark Gurman in Los Angeles at mgurman1@bloomberg.net

To contact the editor responsible for this story: Vlad Savov at vsavov5@bloomberg.net